RP here if you don't want to worry about guidelines or length. (4 sentences or less per post, on average.)
Forum rules
Locked
22 posts

I’m interested; I’ll try and have a CS up by the end of the day
Top

Name: Mirmuse Allis
Age: 22
Sex: Indeterminate
Species: Eucharis
Homeworld/City: A small town near Insignificance
Appearance:
Mirmuse is slightly taller than the average human, and has much longer arms in proportion to their body than one. They have skin made of rock and crystal, which they polish regularly to a high shine (a sign of vanity); while a few of their longer crystals have been broken off at the base, most are intact. The rock is dark gray-blue and the crystals are mostly bright purple and deep blue, with sharp outcroppings of orange and yellow crystals by their elbows, knees, and wrists. Their eyes are bright orange and perfectly circular, with thin black horizontal lines for pupils. They have no teeth, instead having a beak-like mouth meant to crush rather than chew their food.
They like to dress in bright, colorful clothes that clash horribly with their natural colors: they’re a fashion disaster and proud of it. They tend to prefer human fashion, though the human shirts they buy end up torn to shreds after one or two times wearing them due to Mirmuse's spikes. As they can't afford to keep replacing clothes several times a week Mirmuse saves them for special occasions, instead usually wearing a pair of loose-fitting pants and a tight black vest that has holes in the back and shoulders for their spikes. They avoid wearing shoes, their feet being tough enough to not be bothered by most surfaces and their spikes making it hard to find ones that fit them anyway.
Backstory:
Mirmuse moved to Casino when they came of age in search of fame and fortune. They'd always dreamed of being a famous musician, and thought they'd have a better chance of it in a big city than the small, backwater planet they'd grown up on. They haven’t gotten their big break yet, but they’re not giving up: they had to sacrifice a lot to get to Casino, and they can’t bear the thought of going home to face their family as a failure.
Currently they’re working as a waiter to pay the bills and practicing with their bandmates when they can. Recently they’ve been getting a bit of attention on the local scene, so things are looking up for Mirmuse… though that hasn’t stopped them from getting into trouble.
Personality:
Mirmuse is self-absorbed but is a fundamentally decent person who’s quick to offer to help strangers at their own expense. They crave the spotlight and love being the center of attention, taking a lot of pleasure in being a ham even when it’d be better for them to just be quiet and let someone else do the talking.
They forgive easily and would describe themself as a lover rather than a fighter. They only brought a weapon with them to Casino on their family’s insistence, as they feared for Mirmuse’s safety.
Weapon:
A battery-powered rotary hammer that Mirmuse’s family insisted they take with them. Originally intended for mining, but has become a common weapon against people who are made partially of rock.
Other: They named their band, Majestic Muse, after themself.
Top

Oooo Mirmuse definitely looks interesting! Accepted!
I’ll wait for around 1-2 more apps before getting this show on the road
Sound good? 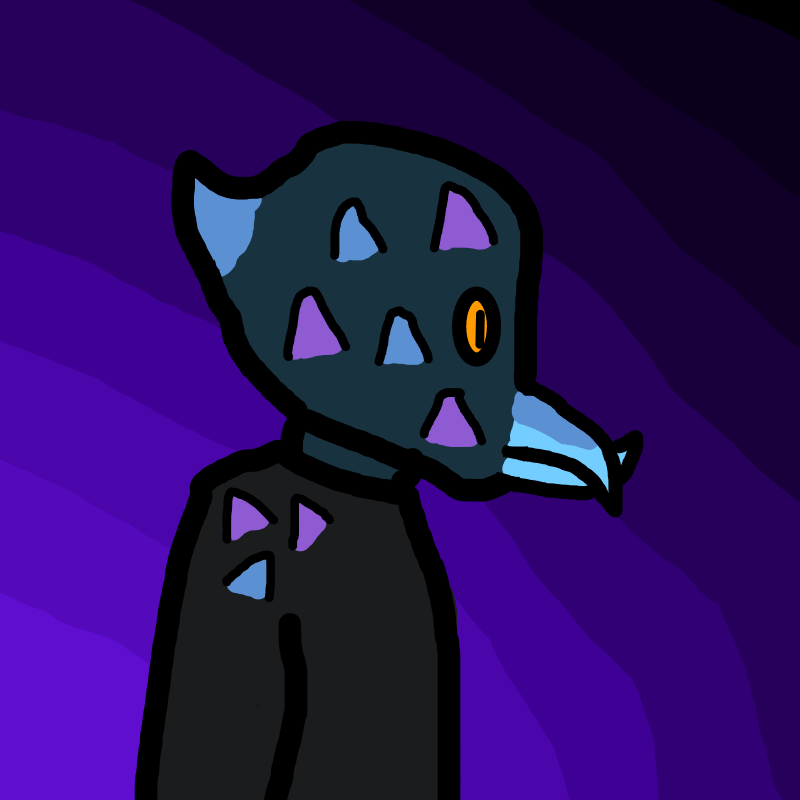 Here is my best attempt at drawing Mirmuse

This looks interesting, I'll try and and get a CS up when I can.
My mum only lets me drink coffee if it's decaffeinated.
Top

Glad to hear it, dude!

Accepted!
I’ll post the thread shortly! Due to Jhibus’ app coming shortly, plot progression will only be minor