Leona growled at the obvious naive group. She cleared her throat, standing up straight. "I am LEONA EINHULD! I WOULD APPRECIATE SOME HELP HERE!" She yelled at them, giving a slightly glare at the group before she turned her attention to Abeandra, smiling. "...Well at least someone wants to help... and hey, they were trying to steal from me.. they should know who I am!" She grumbled. There were thousands of pieces of coin scattered all around the car and area. They had taken quite a hefty fortune it seemed.

Alexander picked up a head, looking it over a little. "..None of them were Izen.. hmph.. just a bunch of thugs it seemed.." He opened the heads mouth, looking in it. "...Good chompers on this one though.. huh" He tossed the head in a bag filled with body parts, still cleaning up the mess his sister had made. A fairly sizable crowd had gathered by now, which were thankfully being kept back by the police force.

Of course this woman had to be the head of one of the families. Takoda probably should've realized it sooner, but... She shrugged it off and gazed at all the glittering pieces scattered on the ground. She approached a bit, giving a gentle wave to Leona and the other two as she came closer, and began picking up the blood stained coins.

She wasn't really sure why she was doing this- she could've easily walked away and left it at that, instead of embarrassing herself like this. Oh well. I doubt I'll ever see these people again, anyways. The people who pulled off the heist were obviously talented, at least to a degree. It was almost a shame they had died, though it was their fault this had happened to them.

Such is life, I suppose.
"hold me,
whatever lies beyond this morning
is a little later on."
Top

Valek once more glanced at the woman shouting, not recognizing who they were, but recognized the name. He never met them or the other heads before, and only knew them by names. He remained silent, seeing another woman nearby starting to quickly pick of the coins. He didn't recognize her, or the others really for that matter, and started to grab his coat collar, upturning it gently before he moved his head around. He knelt down to some nearby and used his gloved hands to start to carefully pick some up, not even touching ones that were ruined beyond saving. The only reason he was doing it was to not end up on the bad side of one of the heads, especially one as loud and careless as Leona Einhuld.
"I have no enemies, merely topographies of ignorance. The people drift aimlessly, collecting into clans wherever they find a glimmer of knowledge."
Top

Now Eva wasn't really the type to dabble in politics but even she had heard of the Einhuld family; until now she hadn't known that the head of the family's behaviour was so foul.The normal part of Eva knew that they should probably just do what the woman said, but The Madness didn't like being ordered around in the slightest. It wasn't about to let her get on her hands and knees picking up coins for some woman barking orders at them. Besides, her hands were shaky and inaccurate, they had been since coming out of testing. It would be difficult to collect flimsy coins.
You're going to get us killed. She's unhinged and she won't regret it.

"I'll eat the pain and strike harder."
Eva responded to what the voice said to her inside her head. She spoke quietly but still growled her speech somewhat. Whilst speaking her eyes were glued to the floor, which showed that it wasn't intended for any of the people surrounding her.
It felt like screaming, but that wouldn't do much good. Eva remained in her previous position, leaned back with her arms hanging by her side. Her eyes gazed down at the girl who she had spoken to before, then to the figure in a full black suit, next to the man wearing the mask with green highlights. All of them were picking up coins. However there was no chance she'd do the same any time soon.
I'm Blondie's Princess
Top

Another car arrived on the scene. It pulling up near the police blockade. The doors opened slightly. And a gigantic form squeezed out of the car. The car visibly lifting higher up when he was out. He was wearing a black suit with a tie. The suit could barely contain him. Every muscle showing through it. His long black hair was pulled back into a ponytail. He looked around at the wreckage, then over to the group gathered, starting over. The police quickly moving out of the way. "Sorry i am late Fraulein!" He called out to Leona. His voice deep and booming. He hustled over to the group as fast as his huge body could. He stopped in front of Leona, smiling warmly. His metal teeth showing. 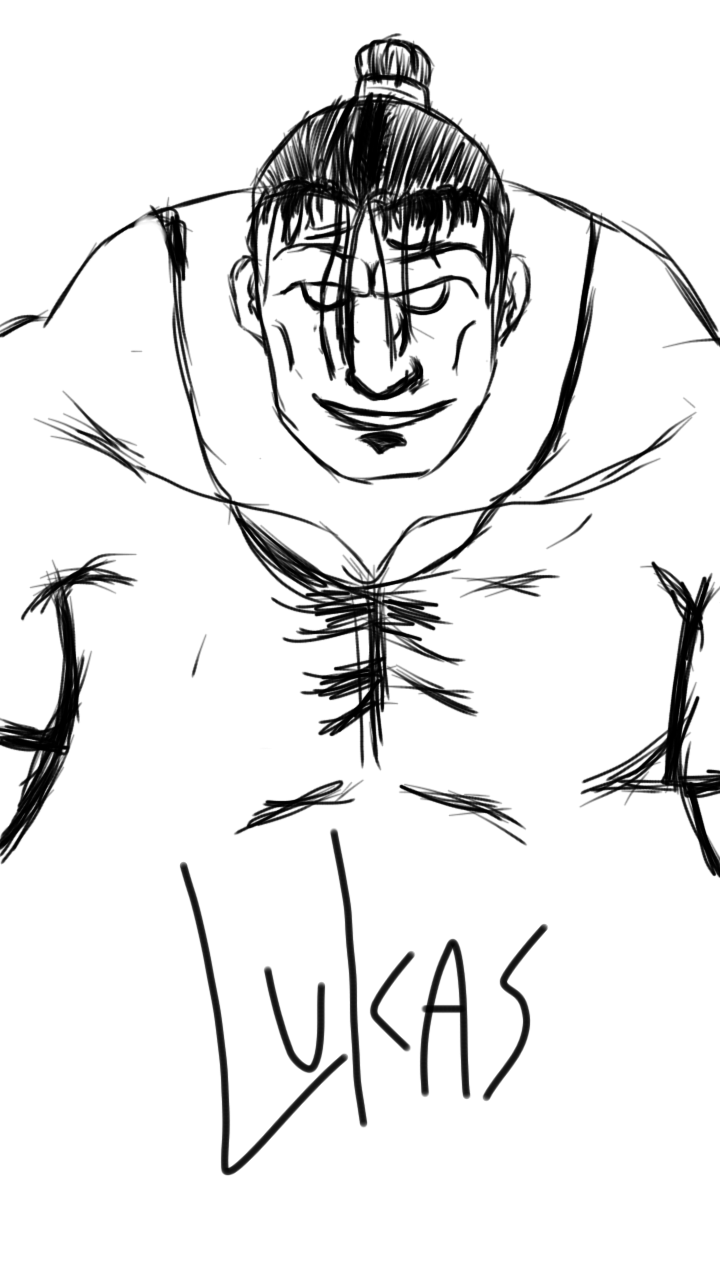 Leona looked up at Lukas, smiling lightly. "....Do me a favor.. get rid of that car..." Lukas, nodded. "Yes Fraulein" He moved over to the now smoking remains of the destroyed car. He grabbed onto it and hefted it high above his head. The two ton scrap seeming to be weightless to the man. A mess of coins and debris falling out of it, onto the ground around him. He turned, aiming to the north, taking a few steps backwards he rushed forward, suddenly tossing the car into the air with a loud yell. The remains of the car shot off like a rocket, sailing straight over buildings and faded off into the distance. A very faint crash being heard later. "Ha! hit the junkyard!" He went back over to Leona, wiping his hands off on his suit. "..I do not think I'm very suited to picking up tiny coins Fraulein" He looked to his huge hands, each bigger than Leona's head. Leona chuckled. "..Just clean up the big stuff.. Ms. Hanazaki will be here soon big boy.." By now pretty the whole block was around the scene, being kept back by police.

Not long after Leona mentioned it, a car pulled up, and the elaborately robed Kachiko stepped out of the car, her hands tucked in the large sleeves of her kimono. She looked around the carnage and made her way towards where Leona and Lukas was, stopping outside of the gore so that her robes weren't stained. She gracefully moved down, picking up one of the coins and looking it over. "Such a mess..." she commented in a strong Japanese accent. "The only regret is that we were unable to discover their motivations..." she had already figured they weren't given the chance to be interrogated.

Clapping broke the silence. A man walking past the police and towards the group. He had a black coat on, with a brimmed hat on. Round sunglasses over his eyes. Under the coat was a preacher uniform. "...Good afternoon everyone!" Behind him a group followed, they were Izen, all dressed in white body suits. His congregation. He smirked, setting the white cane on one of the coins at his feet. He was an extremely tall and thin man. He removed his hat, putting it over his chest and bowing. His long blonde hair falling down around his shoulder. "...Two of the three... hm.. it will have to do..." He whistled, before the group could react a form shot past him and slammed into Leona, sending her flying backwards, crashing through the building behind her violently. The form was already on Ms. Hanazaki, grabbing her from behind. A sickle curved around her throat. The form looked up to the group slowly. White long hair covering it's face. A red eye staring at them. The priest cleared his throat, raising his hand at the group. "..I'm afraid this has all been a trap of mine... those poor souls our leader killed are resting in hell, burning for their sins to mankind... i'll have to thank her later.. for now.." He placed the black hat back on his head, looking to them. "...I'm taking over Sulfur.." The hundred or so Izen behind him moved around him, aiming their weapons at the small group that had been gathered.

[color=#slategrey]Oh we are so dead...[/color]
Upon seeing the weapons being aimed directly at herself and the group, Eva let out a loud, menacing growl. Once again she ignored the warnings of the voice inside her head, which only begged her to run. Eventually it gave up, seemingly accepting the danger that Eva was faced with. Still staying stood in the same place, her eye's drifted over the crowd of Izen gathered around them before moving her hands back towards her waist and pulling out an axe from it's holder.
The leather holder had been crafted by Eva's housemate, Marcus, as she would get panicky and violent when her weapons were taken from her and she felt vulnerable. Now she was required to wear the holder around her waist and keep it hidden underneath her shirt.
It was far too small for her, the axe, but it would do. Letting out a grin, she spoke. It was clear that Eva could hardly hold herself back from rushing towards the enemy, some of her sanity was still clinging on.
"I'm going to give you all something to scream about."
I'm Blondie's Princess
Top

The moment the others started to surround them, Valek drew his handcannon, aimed at some but didn't fire. He looked around, seeing they were now surrounded with the intents of taking over the city. "Not aligned with anyone. Was just passing through." He stated, glancing around, clearly on edge. He didn't like this, knowing he could take a few down if he needed, but then he would soon enough follow.
"I have no enemies, merely topographies of ignorance. The people drift aimlessly, collecting into clans wherever they find a glimmer of knowledge."
Top
Locked
19 posts