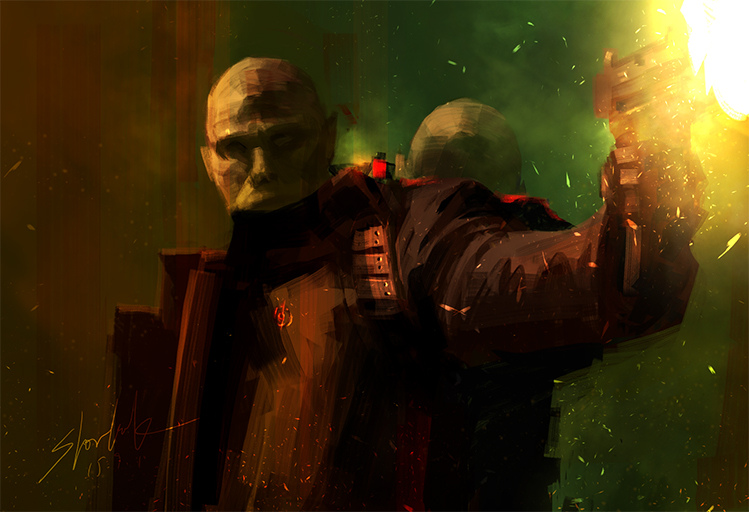 The personally crafted arsenal of one Hunter.

One thousand, nine hundred and forty years allows for a large degree of trial and error. It has allowed one vampire many life-times in which he may dedicate himself to various crafts and to accumulating resources. Having access to funds in the millions, Septimus is capable of accessing almost anything which is available in the public sectors of consumers, that which available to various industries and in the black market. Moving often unseen through the world and operating through proxies that goes back thousands of years -- Septimus Nier proves himself difficult to track.

Combined with his aptitude in blacksmithing, gunsmithing, metallurgy, human anatomy and the combative prowess to know how to apply a weapon, and Septimus can craft weapons which specifically suited to his own use. Weapons and unique customizations that deviate from conventional weapons to fill niche uses and to be able to be employed by his own superhuman physiology. Weaponry which would be too expensive, cumbersome, specialized and/or complicated for most others to use.

Each weapon here thus carries with it a unique name.
Last edited by Lord of Nothing on Wed Jul 08, 2020 6:54 am, edited 1 time in total.
Sandbox

.
A Hybrid-Sword of a different design and purpose than most of Septimus' weaponry.

For a long time had the Pale Man used swords that were large and heavy. Made to be able to hack through multiple monsters at a time in the open fields of battles and slice through immobile shield formations made from those with lesser metals. To cleave gaping wounds into the bodies of large monsters. However times change. Enemies tend to not group together and instead scatter. The more powerful tend to be faster than the giants and titans of old. Leaving less room for the larger blade more suited to older times and different adversaries. To say nothing of the presence of those who could break his sword.

Enter the Esoterium blade Esurient. A modern sword for a modern age. A hungry blade for a hungry man. Lightweight, sharp and versatile -- this is a telescoping sword is the successor to the Pale Man's man's own bastard blade. The blade has numerous features.

Armor-Piercing Tip: The tip of the blade is the hardest and most potent. Edged with "nanocrystalline tungsten carbide", the edge of the blade is extremely dense and in Septimus hand is like unto an armor piercing SABOT. The allows the blade's stabs to be particularly well suited to penetrating metahumans and armored vehicles alike despite it's weight. While still holding an admirable point enough to go right through any conventional armor and enter the realm of armored vehicles. A slash which strikes using the tip can slice diamond.

The tip is replaceable.

Self-Sharpening Edge: No more work on the grindstone for this sword. It's edge has proven enough to cut through concrete regularly, where lesser steels would shatter outright and leave merely a chink. This sword is capable of withstanding the vampire's strength. The edge damages damages body armor and the thick armor of most bulletproof materials. The strength of it's master enables it to eventually get through however. It slices through most flesh as though it were air.

Dulling Edge: The sword can also be made to grow dull, increasing the extent to which Septimus can grip it. This allows for powerful half-swording maneuvers and allows the sword to achieve proportionately spear like penetration and use of similar techniques.

Telescoping Blade: The sword is capable of extending and re-extending, storing some of it's mass in the handle of the blade and then elongating outright. At it's default, the blade is of similar proportions to a medieval longsword. However, it may become longer until it reaches the lengths and proportions of an estoc.

Devouring Edge: Simply put, the sword trades away it's durability for a flexibility and a chemical reactivity. This enables the sword to rapidly eat through most metals it comes into contact with, provided with the sufficient energy to do so. This allows the sword to self repair and also possess immense overall against such materials. To the point of being able to casually lop through lamp-posts and slowly be pushed through tank armor -- causing a rusting effect when in contact with other metals. The effects on the metal vary with how reactive it is. The less reactive the metal, the slower the rate at which it may be eaten. This is also limited by how much energy the sword has on hand.

Voice Command: Lacking a nervous system and having a body resistant to any sort of internal implant -- Septimus is incapable of using any type of device with which to electronically adept the blade. As a result Septimus uses vocal commands to tell the sword to do something.
Sandbox