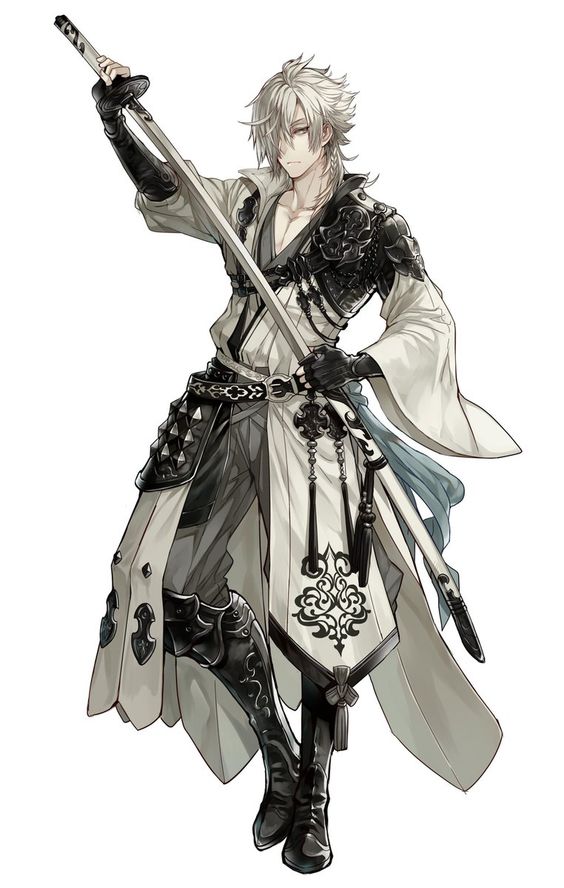 Brief Bio: Allen was born into a world almost separate from modern society. As a young child he was part of a temple, living amongst a group of monks that dabbled little with the outside world. The monks were known for small heroic deeds among the locals, but they were all generally content with staying within the confines of the temple. As he grew Allen learned that he had an affinity for something the monks called "magic", a power bestowed upon him by the great divines. He was schooled in the ways of Kung fu, while learning jujutsu on the side from the younger, more explorative monks. As he trained in the martial arts, he trained in magic as well, reading everything the temple had to offer about the supernatural, and taking from his lessons of the divines. The divines were powerful beings, who, as told by the grand elder, gave wonderful powers to their most devout and heroism destined believers. As he grew more attuned with his powers, and the ways of the temple, he began to explore the outside world more, often visiting the locals, helping them and asking them about any stories they had of the world. He was told about a great "metropolis", a city where many wonderful, and evil people gather, living together rather actively. Hearing these stories gave him a yearning he never felt before, all the while learning what it means to help people, and to experience the world, he enjoyed his life at the temple, but felt that he wanted more. His belief in the divines was as strong as any monk, he believed that Rhudorr, the earth god bestowed him with strength, that Arnea the wind god gave him good health, and the Lizaeron gave him a strong will, and daunting sense of justice.

Allen continued to spend his days training, and learning, gaining as much knowledge and strength as he could, not out of greed or lust for power, but because he wanted to have the strength to see the world, and to help as many people as he could no matter their status, or need, as well as to snuff out the evil that would disrupt the lives of innocent people. It became more and more apparent to the elders of the temple that Allen was not like the monks, it was true that he was a devout follower of the divines, and that he wanted to keep the balance of good in the world, they all thought his sense of justice was admirable, but there was something else within him, a desire, one that no one else had, and they knew that staying at the temple any longer would be a waste for the boy. The grand elder summoned Allen one day sat him down and told him "I see what's in your heart, it is different than those who reside within the temple. Yours is one that lies beyond this walls, far out into the world, you are destined for great things, boy, the divines would have it so." Looking at the elder in confusion yet admiration, he felt the old mans wise words strike a cord within him. "You must go, discover that with which you seek, enter the world and do the work of the divines, discover your destiny." With that Allen's heart lifted, he felt much joy, to be so accepted, yet also granted the freedom to explore the world which he has so longed for. It wasn't long before Allen had found himself ready to leave, he said his goodbyes, wished the other monks luck, and set off for the city of New Haven in search of his destiny, and to help those who need it, all while serving the ideals of the divines.

Powers/Abilities: Words of Power/Power of Voice - Allen's abilities lie within his very soul, or more so his voice and speech. He is able to generate various "spells" through speaking, though there are various rules for activation, and the type of activation, he uses his hands to direct the "spell", as such when he starts chanting a magic circle, varying in size, color, and intricacy depending on how powerful a "spell" he is casting.
Martial Arts: Allen is also trained in martial arts, mostly in the style of Kung fu, and with Kung fu he puts most his efforts into physical self defense, reflexes and speed, and has also learned a bit of Jujutsu
Rule #1: Intent of using "magic" - speaking for itself, if Allen does not wish to cast his abilities then nothing happens when he speaks.
Rule #2: Descriptive, Defining words must be used, i.e "flames, sparks, ice, sharp, luminous"
Rule #3: Most "spells" require multiple words to exist, for example; simply saying "flames" often won't do a thing, but if he says "flames of the fist" then his hands are enveloped in flames
Rule #4: The more words spoken, the stronger/more specific the "spell"
Rule #5: If his "spell" or speech is interrupted before he finishes, then it is cancelled out.
Rule #6: Different words meaning the same way will have different, or more specific effects. I.e "luminous" vs "bright" a "luminous light" chant would brighten up an entire room with a near blinding light, while chanting "bright light" would not only sound lame, but also generate a smaller, more hand held orb of late that would light only a small area, and or a single person or small group.
Drawbacks: - For powerful "spells" he must often say a lot, meaning that he will spend a lot of time focused on his words, and will have a harder time either defending himself, or casting the "spell" if he is in active combat.
- Though the power comes from his voice, his hands are used to direct the "spell", if the hand or hands guiding are bound, or occupied, the "spell" becomes sporadic, often dissipates, or hits far from target, though if the spell is powerful enough and large enough, it my hit in the relative area.
- Has an ethereal material flowing through him like blood called "mana" or "magic power", his affinity for mana depicts how much he has, which in turn tells how much power he can use before getting too tired or weak, if he runs out, he needs to spend some time to recover it.
Affinity of the Elements: Allen's power is rather large, with many complex components to it, and is heavily element based. Allen is far from a master and is still learning his strengths and limits, as such, he has a higher affinity for different elements. His affinity in each element ranges from (None-Newbie-Trainee-Average-Trained-Skilled-Masterful)
- He needs to have a decent idea of what he is trying to cast before even speaking in order to generate the "spell" correctly
Affinities:
Fire - Skilled
Water (including ice) - Trainee
Earth - Average
Wind - Trainee
Electricity - Newbie
Light- Newbie
Dark- None
Blood (very self-damaging/risky) - Newbie
Mana - Skilled

Equipment:
Lotus Jacket - A long flowing hard leather made white jacket, with an opening around the legs, large opened sleeves, and a slight fire resistance element to it, Infused with blacksteel plate armor on the left shoulder with a harness that connects it to the right shoulder, and a patch of studded leather armor on his right side.
Black Finger-less Long Gloves - Mildly flame resistant, interior made of a thin, cooling brace to help deal with extreme heat of spells and self injuries from wild incantations.
Grey Cotton Trousers: Just some normal trousers, nothing special about them, aside from looking nice.
Braced Hard Leather Boots: Black leather boots, with protective braces fused in the interior that helps with shock absorption and quick movement, and have small steel plates around the knee area.
Top
Post Reply
1 post • Page 1 of 1