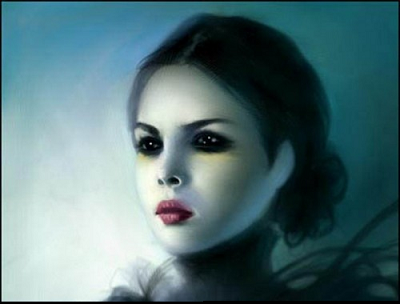 Candelara was reading a book when she heard her phone ring. Her gaze shifted from the yellowed pages to the device sitting on the side table. "Maybe that is something interesting..." She replied, closing the book she read over a thousand times, and reached over. Lifting the receiver off of its base, she placed it to her ear, leaning against the arm of her couch. "This is Candelara, how may I help you?" she responded, just in case it was the Prince or anyone else. In case it was business. Best not to be informal.

Dondra looked at Ariana and frowned, moving into the kitchen again to move the noise away from her. As the other end is answered, she turns her attention back to the phone.

"Hello there, Candelara. It's Dondra. I trust the evening finds you well and very bored. I need you to come to my house as quickly as you can. Don't tell anyone where you are going. I have.....something that may peak your interests. Come through the back door, it will be unlocked for you as usual. Also, bring two bag of fresh blood if you can.", she said, keeping her voice close to a whisper so as not to disturb Ariana's already sensitive hearing.

"How long will it take for you to get here?", she asked, looking back into the Living Room at the Fledgling.
I'm usually most active on Tuesdays and Wednesdays. Minimally actives the rest of the week but I can find a way if RPs are going very well and I need to be around. Addicted to RPing and RP almost anything. ALMOST! There are limits.

She listened to her friend, knowing well enough things were going to be interesting because she called. The fact that she couldn't tell anyone intrigued her more, and needing blood bags made her extremely interested. There was only one reason why she would need that. "Who do you think you are asking? I can be right there. I will be there soon." she hung up, getting to her feet and changing into more modern clothes. A long, modern designed dress. It was black, much like what she had been previously wearing, but it blended in more. She went into the kitchen, grabbing a leather messenger bag and grabbed some bottles out of her fridge, as well as a couple of ice packs. Placing them gently into her bag, she headed out to Dondra's house.

Within a minute, she was slipping in through the back door, taking the bottles out of her bag. "I'm here, Dear.." She said as she entered.

Dondra had just ended the call and smiled one of her rare smiles at her friend as she entered the house.

"Thank you for coming, this is alittle out of my expertise and I trust you to will be more use in this instance then I.", she said, motioning towards the doorway leading towards the Dining and Living Rooms.

"The Sheriff and Prince can't get wind of this yet. I think she may be illegal.", she added, her own eyes rising towards the Fledgling sitting on the couch in the Living Room bundled in the throw.

"I don't want her destroyed.", she whispered, looking back at Candelara seriously.
I'm usually most active on Tuesdays and Wednesdays. Minimally actives the rest of the week but I can find a way if RPs are going very well and I need to be around. Addicted to RPing and RP almost anything. ALMOST! There are limits.

Her memories soon jumped around in her head and casued pain to fill her mind. She falls off the couch "Why did he do this to me "
Top

Dondra frowned alittle. Being who and what she was, she was nearly immune to the emotions of others, however, sorrow and fear fed her in a way that could have a very dangerous reaction upon her calm demeanor. She moved slowly towards the stricken Fledgling, keeping a safe distance for the girl's own safety in her current state.

"Easy, young one. She is a friend and she is here to help.", she said softly, projecting a calming aura towards Ariana.

"You're safe here.", she said, looking back at Candelara so she could help with the girl.

The sorrow the girl was feeling was already starting to have an effect upon Dondra as her pupils started to expand and consume the whites of her eyes, the crimson glow already starting even though she struggled against her instincts to consume the girl's torment, keeping her concentration on projecting a calming aura. Already she could feel the tattoos on her back starting to twitch under her black corset and top. She gave Candelara that look that said "do something before I can't control myself".
I'm usually most active on Tuesdays and Wednesdays. Minimally actives the rest of the week but I can find a way if RPs are going very well and I need to be around. Addicted to RPing and RP almost anything. ALMOST! There are limits.

Candelara followed Dondra, grabbing a glass from the kitchen as she did, heading into the livingroom to hear the girl's claim of knowing the Sheriff. This got a rare chuckle from the Kindred. "The Sheriff we speak of is not one that you speak of," she set the glass down and opened the bottle, slowly pouring the thick liquid into the glass. "Kine know not of our ways or political structure. If they did, then our entire society as we knew it would come crumbling down." the Keeper seemed completely unamused by the girl's actions, rolling her eyes at the theatrics. "Must be a Thin-Blood. Only explanation as to why there would be enough time to bury a Childe after Embracing them. Also not sure why one would go through the entirety of breaking a law punishable by death, just to bury the poor sod like it never happened. Maybe it was because he cared and couldn't escape. Who knows?" she commented, stepping up to the girl and holding the glass out. "Best you drink up before the Beast becomes uncontrollable. Which for a Thin-Blood Fledgling, It most likely would be far too easy to be overcome."

Ariana slowly calmed down "I'm sorry " she felt a little calmer"I shouldn't act that way" her fear slowly faded. The womans scent may
have been slightly the same but she smelled a little nicer like flowers. She sits back on the couch and takes the cup and takes a slow sip before drinking more. Her mouth hurt she could feel something poking her lip. "What's going to happen to me"
Top

Dondra sighed deeply as the girl calmed, the emotions slowly ebbing. She leaned back against the wall forgetting for a moment about her back and quickly coming off of the wall so as not to injure herself. She blinked heavily and looked towards the two Kindred.

"Her name is Ariana Stone.", Dondra said softly to Candelara.

"We are going to figure this out but first we need to get you clean and fed. Candelara, would you educate her for a moment? I'll go.....run her a bath. Being covered in soil can't be comfortable.", she said, her voice alittle shaky.

The overflow of emotions from the girl had hit Dondra hard and unexpectedly, she would have to be careful around her until she was alot calmer about her circumstance. Without waiting for a response, Dondra turned and moved towards the stairs, heading up to the bathroom quickly. Her hands shook as she moved quickly to the second story, hurrying into the bathroom and closing the door. She didn't need what was about to happen to scare the girl and Candelara was sometimes unnerved by Dondra in this state. She had promised not to allow her change to happen in front of her friend if she could help it. Soon as she closed the door, a dull ache started in her back, her hands moving to her corset to quickly snatch it off. She cursed under her breath as she heard the material of her favorite mesh bodysuit tear, the tattooed wings on her back quickly shifting into real wings and protruding from her back. They were large and beautiful wings standing high and regal from her back, soft coal black feathers covering them as they appeared with the soft sound of their opening. Black mist formed at her feet, tendrils reaching up towards the doorknob and Dondra's hands and arms. Her skin paled quickly, going to an almost pure white as her glowing red eyes closed against her trying to will her change to stop.

Control this! It's not the time!, she whispered in her own mind, fighting her change as she felt her body shifting.

She released the door and almost fell to her knees but turned, staggering to the bathtub and reaching for the knobs to turn on the water. She needed to calm herself and running the bath would help with that. She had to change back before the bath was ready but the running water should mask any sounds she made as she struggled against her nature.
I'm usually most active on Tuesdays and Wednesdays. Minimally actives the rest of the week but I can find a way if RPs are going very well and I need to be around. Addicted to RPing and RP almost anything. ALMOST! There are limits.

Ariana could feel something was wrong"Is she ok? I could feel her hurting somthing on her back was hurting her" she wanted to make sure that the woman who helped her was ok "I think I remember you two laughing at a bar I gave you drinks"
Top
Post Reply
264 posts