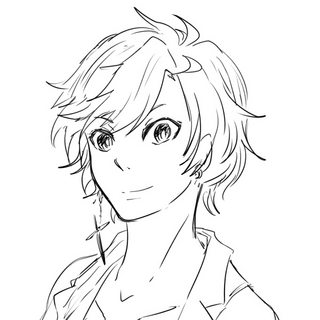 .
Name: Reika Funabashi
Age: 17
Gender: Female
Experience with Magecraft:
Reika has been practicing the few magecraft spells she has learnt from her uncle since the age of 10. While she wasn't like a diligent student, she had not lost the habit of training weekly, allowing her to have a considerable mana stamina.

Knowledge of Holy Grail Wars:
She knows nothing about it and does not have the knowledge about any of the other mages other than her uncle.

Magic speciality:
She can conjure up to 7 glowing 3D shapes. Often something like a glowing prism, or cross or flat disk. Against most magic or physical attacks they can act as a good shield. However, it is not able to withstand against NPs or extremely condensed magical attacks. For particular cross-shaped materializations, Reika wields it like a sword, utilizing her skills from Kendo club.

Bio:
Having her mother passed away when she was young, her father often at work overseas, Reika's uncle was often the one who had looked after her after school. "Look after" was probably more of an overstatement, as soon Reika had learnt how to cook on her own, as she found his food to be rather bland. Often on these weekdays, Reika would be allowed to play console video games with her uncle (after she showed her homework was finished, of course). And every Friday afternoon, Reika would watch him conjure up shapes, something called magecraft.

Obviously it looked cool to any kid so she asked if he could teach her that. However, she was to not use it unless it is for defense purposes. "Don't show it to anyone, don't tell it to anyone. Don't be a mage at all, I'm only teaching you this so you can use it when you are in danger." She had heard that her father, or her uncle's younger brother, had also tried learning it when they were younger. In the span of a year, she had learnt a few tricks from him, before her uncle had passed away from a mysterious murder exactly seven years ago.

Jurou's body was found to have quite a lot of heavy wounds on his side, but there was never a trace of the weapon. Little did Reika know that he had been a master in the Holy Grail war.

Seven years later, Reika is now a rather independent girl. Among her class, she's known as the tomboyish girl that has no fixed friend circle. She's reliable for other females to ask her for advice. She had joined the Kendo club since high school and has been a diligent member.
Previously Luki | Twitter Art Blog | Status: Slowly coming back from long RP hiatus.
Top

Wow you made all professional like
W.A.F.F.L.E.O: We're All Friends Friends Love Each Other - Ray Narvaez Jr.
Top

Background: At the age of 15 Ragnar joined with Siward-loyalists to drive out King Froh after Froh of Svealand invaded Norway and killed the Norwegian King Siward. King Froh was famous for carrying tame serpents around his neck in battle whom would bite his enemies while he fought them. Therefore Ragnar fashioned a coat and breeches from a hairy animalhide which protected him from serpent bites. Since the way he defeated the King was unusual he was given the name Lothbrok, the hairybreeches. As an adult Ragnar was a farmer and a raider for his Earl. But as the raid to the east became less fruitful as well as his frustrations with the Earl grew he wanted to raid west for the possibility of more plunder. After a successful raid west without the approval of the Earl tensions had risen between the Earl, and Ragnar. Which lead to both men battling each other in single combat. Ragnar killed the Earl, and became the new Earl.

After successful raids west to Northumbria Ragnar starts to plan a much larger raid. With the help of King Horik of Denmark they sail back west only for rough sea and storms that pushed them Wessex instead of Northumbria. After a series of ups and downs for Ragnar. King Horik become paranoid the Ragnar might plan on his Kingship. After a failed raid on Wessex invoked by Horik, Ragnar and his allies agree to a treaty with the King of Wessex. Ragnar's true intentions for even raiding in the west to secure land for his people to farm an thrive, and the treaty secured that dream. After a couple of "betrays" to Horik's authority as king, Horik secretly plans on killing Ragnar and his family. When Ragnar and his allies return home Horik launches an attack on Ragnar. After the battle settles and Horik is dead Ragnar gains the title of King

Ragnar next major raid was the one on Paris they were pushed back multiple times one of which got Ragnar badly injured. Even in his weaken state he created a plan to get within the walls of Paris. He secretly met with the Franks to informed them that he was dying and would like to be baptized then buried in the city. His ploy worked for when he was in Cathedral after his "death" he emerged from the coffin. He takes the princess hostage to make them allow his army inside the walls. With a successful raid on Paris Ragnar returned home leaving a small party with his brother Rollo in charge.

After hearing that Rollo had betrayed everybody by siding with the Franks Ragnar decides to launch another attack on Paris. But, with Rollo's knowledge of the viking ways he is able stop the attacks for getting any traction. The remaining vikings returned home defeated. Ragnar goes into a 10 year isolation. Then when he returns he tells his sons that he plans on going back to Wessex none take up his offer to go with him except Ivar the Boneless, his crippled son. Once back in England Ragnar tells Ivar he's not planning on returning home so when they reach the King of Wessex's village. He tells the King he must kill him, but the King refuses so they plan to have to King of Northumbria to do it. When Ragnar is alone Ivar he tells him of the plan and that him and his brothers must come and seek revenge but not on the King of Northumbria but of Wessex.

So the death of Ragnar "Lothbrok" Sigurdsson by a pit of snakes brings about a great army of Vikings to the shores of England.

Noble Phastasm: The Great Heathen Army: Once Ragnar is severely injured where there's recovering all masters and servants in the area is transported to what was Wessex to face the massive army that had came to avenge Ragnar's death lead by his sons.

Strengths: Ragnar keeps his word no matter what. Ragnar has extensive hand to hand combat along with advance battle tactics. His fearlessness to charge head first may seem as a weakness but in reality it's his biggest strength for it gives him an unpredictability to him making it harder to fight him.

Weaknesses: Just as keeping his word to a fault it's his strength so is it hi weakness for it may lead him being at a disadvantage.