With a suggested standard of two paragraphs or more and dedicated lore threads, this is for the more verbose roleplayer. (10+ sentences per post, on average.)
Forum rules
Post Reply
402 posts

Oooh, perfect. I love Firefly.
I look in the water and fear what I see
I know it's no stranger but I know it's not me
My life is a lie that was uttered in jest
If I can't change at all, let me rest
Top

Eh, I don't know if I want to keep Skriviks. I might make something entirely different if that's alright with you
Top

Totally! If you aren’t feeling your character or you want to try something new and excited, I won’t hold you back.

What were you thinking?
]
Top

Perhaps a robotic race. Something akin to the Exo from Destiny, which I'll be basing the appearances off of.
Top

Would they be organic-machinery mix (Bionicles)? Or a creation of mankind or some other race (Geth)?
]
Top

Organic-robotic mix. I was thinking that they propagate similar to the vex, but I'm not entirely sure how I'll fine-tune the details.
Top

Hmm, like their creators are long dead, but they still exist. I'm looking forward to seeing what you come up with.

I'll shoot you a DM in a minute with a proposal.
]
Top

Species:
The Conscious / The Awoken / Husks
Provaetus, Guardians of an Ancient Age

Average Height:
Around 6 and a half feet, though there are some that are around 7 exact.

Cap Age:
Essentially limitless, provided that proper maintenance and care is conducted. Given the ancient status of these beings, one could assume that they possess an incredible longevity, if not immortality. 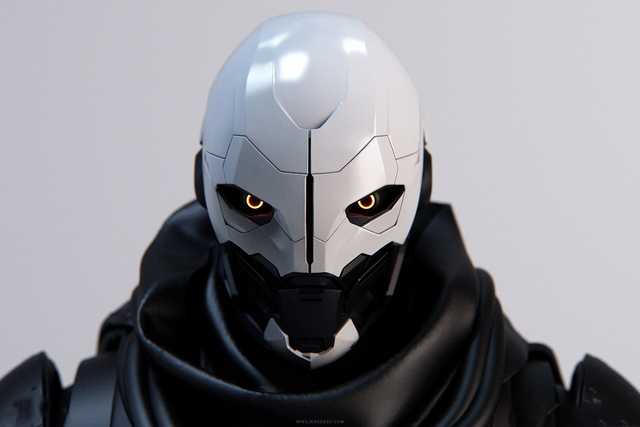 "Conscious", photo taken by Franz Kepeler.
The above image earned Kepeler a Nobel Prize by the human society upon EX-3003 "New Europa". The context of the image was described in an interview nearly a year later.

"We'd discovered them in a subterranean bunker of sorts, just sitting within these enclosed capsules. Someone must have triggered a sensor, or something, because, uh, moments later they had all, uh, seemingly awoken at once. It was a sight to see.

"I'd brought my camera with me—for purposes of photography and log-keeping—and, once we had taken them all out they all seemed, uh, well, unresponsive. Not in the way that they were catatonic. They were alive, but... they just didn't speak. They looked at us, silently observing us as we talked, um, and about a day later of this silence one of them began to speak. And we pulled this one aside, said, 'who are you', and he, uh, responded with one word: 'Conscious'. And so I asked if I could take a picture of him, and he didn't even know what they meant, obviously, so I lined him next to the wall of our tent and took a photo. And, uh, that was the first time any of them spoke. 'Conscious'. And that's what we called them, from then on."

The general makeup of a Conscious is a rigid and metallic exoskeleton with a presumably sensitive and internal network of electrical systems. They are incredibly complex in their design; subtle eye movements and faceplate shifts often make expressions lifelike and distinctively "human", and their patterns of speech have evolved to mimic that of humans'. They are explicitly humanoid in appearance, and many range in monochromatic colors of grey, black and white white various color accents to highlight individuality. While white seems to signify a more servant-centric role, greys and pitch-hued exoskeletons signify that of defense and assault suited roles. These models often sport integrated weaponry.

They are entirely sentient, and as such possess free will and emotion. Given their fairly recent awakening, however, the entirety of galactic society is a culture shock to them. All fled New Europea after reawakening.

The entirety of the Conscious race is an enigma. Only a handful have ever been confirmed to be in existence, and even then the majority of these robotic beings prefer solitude from society. Rumors circulate that some have been captured and held for experimentation and testing on New Europa.

Digestion: They require no food or sustenance to maintain operation; a marvel of design and a violator of thermodynamics, at first glance. Speculation leads to the assumption of some sort of power source within the interior of these robotic beings.

Reproduction: They require no means of propagation, having been designed for singular purposes and without the intent of sentience.

Psychology:
You cannot describe what you do not understand. While psychoanalysis of the Conscious has been attempted, their behaviors and emotions mimic that of a typical human's. This can be seen as an imitation of human psychology, as the robotic beings predate much of human civilization, most definitely existing before the modern man had arrived at Aurelius.

The nature of their machinery completely negates the affects of telepathy and conventional forms of empathy, leading many to believe that these metal husks do not possess emotion at all and are simply adapting traits of those around them in order to assimilate into modern culture.

Rest assured, they do feel emotion. They do not know how to process what it means to feel.

Adaptability: Being near-ancient beings, one could assume that their outer exoskeletons have incredible resistance to wear and tear. While this might be true for protecting against erosion of their "skin", the Awoken anatomy is far more resilient than a human's but still has its limitations. They are waterproof and can resist higher temperatures than the normal human benchmark but are still highly susceptible to kinetic damage, especially at the weak points upon their exoskeleton.

Language:
No recorded language, other than the commonly-used forms of binary coding. The Conscious appear to have a translator module within their body, as they are able to understand most languages presented to them despite no clear knowledge of where they pull this compendium from. Such a catalogue of languages, however, is outdated, as many fail to understand modern slang and certain terms presented to them. Further testing must be done to explore this language barrier.

Cells interlinked within cells interlinked
Within one stem. And, dreadfully distinct
Against the dark, a tall white fountain played.
Last edited by Quirbles on Tue Mar 27, 2018 10:57 am, edited 1 time in total.
Top

"He seemed the sort to even Dream in suave."
Top
Post Reply
402 posts