To Be a Hero

In the edge of vision a green blur passed, followed by the heavy rush of dispatched air. Chaya’s gaze followed after the mass, her feet seeing to return to the easy motion they had earlier, stepping easily between patches of solid ground. It took her a moment to realize that the mass was Suzuki, and another to realize that her trajectory would take her right into the —CRACK.

Her body continued, automatically adjusting as she turned in the direction of the crash. Suzuki’s body toppled backwards nervelessly. No traps freed up her pace as Chuya sprinted over to pile her friend had fallen into.

“Suzuki! Are you okay?” She called as she drew close.

by Myrn
Yuri had listened to Nina sharing her thoughts and ideas. They were quite insightful and were definitely a breath of fresh air. To have someone else to think and be creative with, it was all very exciting, but not as exciting as being included in a little competition.

Nina the little minx had laid out her traps however, Yuri had been observant enough to avoid those and more or less keep up if only to humor her competitive request to catch up to Torino-san.

As Yuri gained on Nina, something had blurred past her and crashed into one of the buildings. It was was Suzuki and Chuya was already rushing over at least. Having caught up with Nina, Yuri was quick to catch a glimpse of Torino doubling back towards them prepped and ready to kick her partner in the gut all while yrlling something about a pop quiz. Not if she could help it.

Yuri shoved Nina to the side while bracing herself as her quirk activated. Already she felt herself slipping through the ground.

by Wint
Her plan worked perfectly!
As Nina ran through the course, even with her speed being affected by her need to create proper circles using the very limbs that were keeping her upright and moving forward, the impact it had on some of the competition had to have been great, as even a hot shot such as Shun was nowhere in sight, though she didn't have the best view as her little stunt required absolute concentration. As she went on with the course Nina had spun her arms around, twiddling her fingers as she made larger portals on her side, far fewer than the many divots on the ground, but a few to send people running the wrong way if she was lucky enough.
It required much concentration, it would seem, as with the shortest blink of an eye, Nina had missed the short teacher's halt and quick turn, only being able to look up as he was charging at her. Nearly tripping over her own feet, Nina began to spin a portal in her hands, trying to send him somewhere behind her or her somewhere outside of his trajectory. But it was impossible. With the amount of time granted to her, Nina was only able to create the shape of a crescent before she was--

Although she had nearly been able to stop, Nina still had to take a moment to stand up.
To the right in the corner of her eye Nina was able to see a field of light, and just in front of that... she saw Torino-senpai. In front of that she could see Yuri, halfway through the ground.

...
White noise buzzed through Nina's ears as she stood up. Her gaze focused on the two figures as her hands clenched into fists.
Her feet, were they moving? They moved on their own, but Nina was okay with it.
Her legs, were they running? They rushed in the two's direction. She was okay with it.

Her fist launched forward, Nina was not okay with it.
Yuri had to be fine, she had to be, but what if she wasn't? What if she had gotten herself hurt over Nina's recklessness?
Her body curved as her left hand curved for a punch, and her right hand drew a circle about twice the width of her fist. Be it for a sucker punch or to try and evade the old man's attacks, while both were highly unlikely, she had to try.
"YOU DICK!!" She yelled as she went for the hit, feeling her skin practically burn with rage as she wanted to make him pay. It didn't make sense. She didn't need it to.
She just wanted him to pay.

by Someguy500
Someone had flown through the air and crashed into a building. Lee couldn't properly muster much hope that whoever it was would be okay. He only felt his feet pound on the track. Soon enough, he could pull ahead, leave everyone in the dust and--

The coach had spun around and leapt backward at the girl in the lead, feet first. Before Lee could react, someone else had raced past him. Shoving the lead girl out of the way, this one, in a dark costume, started to sink into the ground as she ran.

Tch. He scowled under his mask. Should've reacted faster.

So that's how it would be, then? It certainly made for a nasty surprise, just like real hero work would likely involve. Talking the opportunity to stop worrying about the potholes that were being made, he allowed his legs more energy, pushed himself, each stride growing wider in order to try and pull ahead. Watch your back, keep low. The coach was a threat to his victory, now, too. Lee made sure to look backwards frequently in case he was the one about to be jumped instead. He gathered his Quirk around his fingertips, too. With luck, he could slow him down and stay ahead. He still had the stamina for it, even if it came down to a dead sprint. 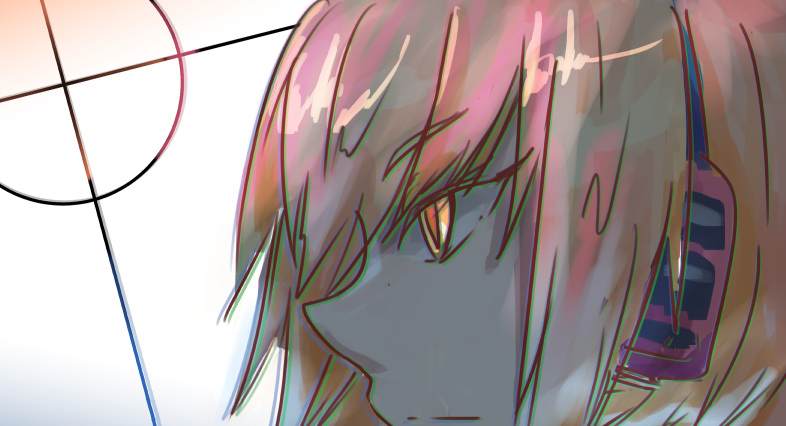 Another person sped past her, and Miki brought up her hand to quickly shield her eyes from the wind. Thus, she didn't really get a good look of who it was. What was clear was that she was another place -

A loud thud on the ground interrupted her thoughts, and then following a few sounds of collision. Miki frowned in confusion as she heard yells from a girl. [1]

Without (the ability to feel) a shred of panic, Miki maintained her pace, to continue conserve her stamina. Until she spotted someone lying motionlessly on the ground, not far from another collapsed person next to Iseya. [2]

Miki's footsteps stopped beside Rikinobu. Bending down, she grabbed a fist of his collar and dragged his upper body half up. "Oh wait, I might choke him," Miki realised, her hand letting go while the other grasped on his arm tightly to drag him up. "Oiiiii, Rikinobu-kun." Miki said in a slightly louder voice over the chaos on the track field. "You awake?"[3]
Code and art by Killian Notes
[1] Nina yelling at Gran Torino. I'm assuming this happened shortly after Shun had collapsed.

[2] Chuya's hair is blonde, at the moment it's just Miki caught sight of that quicker than everything else she saw in the scene.

[3] Similar to with Rocko, I'll leave up to you to decide if Miki might have been less delicate in her way of handling.
.

by AnimuGirlVoiceLebi
There was a moment of silence as Shun was still after being raised by the halo girl. Then suddenly he jolted awake and reached towards his throat and looked around himself. The pain from his crash had yet to hit, but he knew it was going to hurt later. After looking around briefly he realized he was being held up by halo girl and she had asked him if he was awake. His mind lazily went through a few exaggerated possibilities of what would happen based on what he did or said and reached a wonderful conclusion. He locked eyes with halo girl and then lazily said, "no" before relaxing and letting himself go to sleep.

by Kurusu
Now there were two... no, three commotion on the running tracks. At the same moment when Gran Torino scared Eimi shitless for straight up assualting the leading girl, a gust of wind shot past her, causing her to be straight up terrified. The running tracks had became a battlefield within seconds. Is this how UA academy do things?! Ararara...

Soon, Eimi made her way past the group huddled around Suzuki. So long as she kept a low profile and avoid commotion, she should be able to finish in the upper half of her class. While everyone was using their quirk, Eimi was sure she could finish cleanly and quietly, like an eye of the storm!

But then she accidentally made eye contact with Gran Torino.

It was brief, and Eimi prayed for her dear life that the crazy instructor Torino did not care, or noticed they made eye contact. Please no. Please. Please!

Birds. Tweety little birds above her head. She reached out to catch one, and -- it was a face?!

Suzuki half-opened her eyes to see Chuya looking down at her, eyes filled with concern. She smiled and waved slowly.

"Did you see how fast I went?" Her voice was soft, daydreamy. Reality hadn't fully come back yet. A careful hand reached out to touch her head -- it was hurting, in a distant sort of way -- and found the split seam of the helmet. Suzuki pouted. "I just got this!"

Torino laughed like a loon at Yuri's quick thinking, sailing over her head and spinning effortlessly in the air. Clever girl. Saving her teammate, but not sacrificing her own wellbeing for it. He almost wanted to congratulate her.


But here, he was the villain, and they were the heroes. He had to play the part! Without a word, he launched at Nina, sailing over her arm, pushing his legs down on top of it - with a burst of air - to flip gracefully over her head. He pushed another blast at her back, heading straight towards the dark-skinned girl who was taking advantage of the chaos to gain some lead. She glanced at him. He smiled back. In a second, he'd caught up to her, spinning to aim both his heels at her chest.

by UmbraSight
No sooner had she asked if Sazuki was okay then the girl, bleary eyed, reached out in a half-hearted attempt to touch her face. Chuya leaned back slightly, the fingers missing her nose by a few inches. Suzuki’s eyes fluttered open, or well, half open, and the girl waved groggily.

“Yeah, you went really fast. It was cool.” Chuya said thin smile as Suzuki asked her question. Was she okay? Chuya held a hand out for Suzuki to take. “However I think we should work on your landing before you try it again.”

She eyed the crack in her helmet and looked Suzuki up and down again. “Are you okay? I can help you to the nurse if you think you need to go.”

Eimi panicked as Gran Torino quickly approached her, heel first. Although Eimi is pretty light on her feet, real combat experience was not something she had. The only thing she could do was press her panic button.

Her eyes flashed with the light of the sun.

With a wince inducing thud, Eimi was stopped in her track and ragdolled on the floor. She seemed to have lost her breath, as well as her consciousness.
All times are UTC
Page 12 of 14
Powered by phpBB® Forum Software © phpBB Limited
https://www.phpbb.com/