Character Sheet
Name:
Age:(Life expectancy is 100 years)
Gender:
Race:<Custom is fine, a brief explanation is satisfactory>
Occupation:
Scholia Class:[If you are pursuing the realm of magic]
Equipment:(Important items of whatever your character carries)
Character's Road:[BIO]
Appearance:(I accept all forms except real images/photos)
Extra:

Character Sheet
Name:
Nikita Iretomiwa
Age:
25
Gender:
Female
Race:
Human
Occupation:
Military
Scholia Class:
Sentinel
Equipment:
Hestia Armor[Sentinel]
Sentinel Shield(The magic she specializes in is centered around it)
Weapon varies on situation. Usually wields what is provided and/or available.
Character's Road:
Nikita is not native to Hestia. A refugee who fled with her family five years ago during a time of civil and political unrest. Although farmers, it was foolish to ever ignore talks of those who visited cities from the village. That was their news. And every time word got around events only became more extreme. Political unrest could have led to bloody conflict that would expand to their area. Nikita never saw the big cities living her entire life in a small village. Everyone knew everyone. A tight community. At this point, her life was standard. Nothing to note. Until immigration.

Whilst ill advised by the community, Nikita's family went against. Leaving everything behind, taking the first boat to an unknown foreign land heard about from passing travelers. Every coin from the small amount they had spent. Not a single spared. There was no looking back. The voyage took a few weeks before reaching one of Hestia's main cities port. Although broke on arrival, Nikita's father was able to secure a position on the boat they voyaged on as well as her oldest brother and uncle. A simple trading vessel that made trips to various countries.

Still challenges presented themselves out the gate. Adjustment to the city life was hard. So many people, so much competition. It was tough but somehow they managed. All pitching in with the little made. When Nikitas father returned from trips, he often shared stories of what he had got to see, as those accompanying him. Even bringing word that their homeland spiraled into a civil conflict and returning was far from soon.

Nikita, her mother, and extended family were left to fend for themselves. She enlisted into Hestia's military. With luck and hope, they would accept. Guaranteed pay and housing? It was worth the shot. Boot camp was grueling. Brutes were more rewarded and frankly, she didn't have the background. However, being pulled from the regular and placed into the Arcane Scholia boot camp had been one of the best things to happen in a while. Intense, yes. Through determination and tenacity Nikita persevered. Keeping the family fed was the driving force.

Two and a half years it took to be officially enlisted. Brought in the Sentinel class, Nikita's career into the military took off. She has served Hestia, being posted to various places with various experiences. Good and bad. The pay is nice but for an entire family it's not entirely enough. Being in the military has allowed her to see the world; meeting people of all types that never would have been possible. So many experiences, and so much to learn from, it's sparked a natural curiosity. 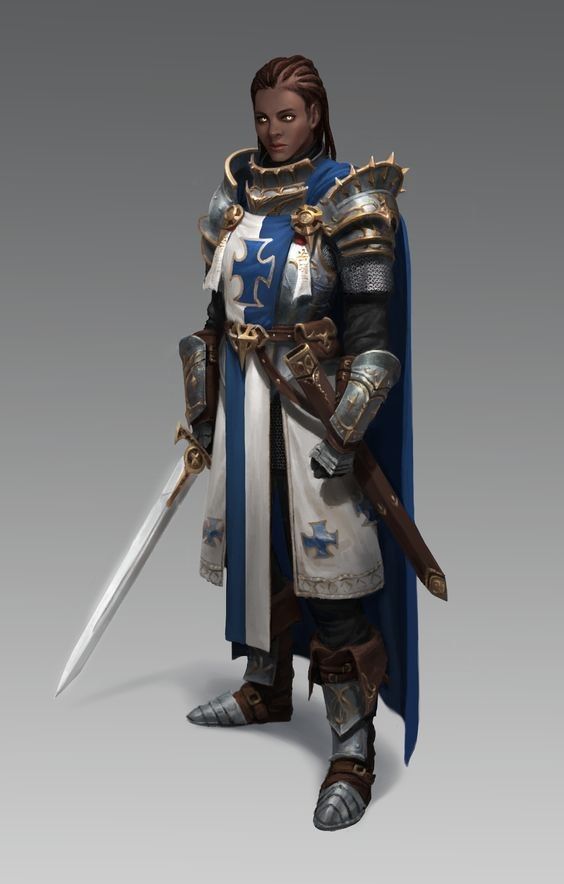 Race:
Many hundreds of years ago when the lands were old and the Ifrit were free, waring bands of horned beasts rallied against each other for territory and honor. These horned beasts were considered not but monsters by the Elves and rarely Men who might cross their paths. Yet they were a society built on tribes and minor kingdoms. A Minotaur's strength was said to be unmatched, and that was true until the Ifirts were taken. Upon their sealing, the Elven King reached out to the many waring clans of Minotaurs with a proposition that had been passed upon every race. In the eyes of the Minotaur, this threat was empty and the clans continued to war amongst themselves. Yet when the Elven armies marched on Minotaur lands the outlook had changed. By the time they had banded together, it was already too late.

Out of the tens of thousands of Minotaurs, only a few hundred survived the brutal conquest of their land. And in the chains of the Elven Empire more would die to the whip and starvation. A Minotaur slave was seen as a badge of the highest class as their rarity and incredible strength was nigh mythical. Yet, through poor treatment and a burning hatred that began to fester in their hearts, the remaining Minotaur worked for the day the Elves would be weak. When that day came, it was the mighty Minotaurs who took first to freeing their fellow slaves, arming them, and rallying them against their enemies. In the wake of the hell they had been put through, they spared no Elf they passed as now only 27 Minotaurs lived to see their chains broken and their lands returned.
Occupation:
Blacksmith/Tanner/Leatherworker/Hunter/Chieftain

Scholia Class:
While he has not received any formal training in magic he does have an innate sense that would, if he joined the military, push him to be a Vanguard.

Equipment:
He wears no armor as his hide is almost as durable as that of studded leather.
When it comes to the defense he takes a wooden shield passed down from his father. The shield has magical properties as it was blessed by the Ifrit many hundreds of years ago. Yet with his tribe's history being all but expunged, he only sees it as an old wooden shield.
While he prefers bigger and longer weapons, Nivis has not shied away from the "small" nature of the longbow. He is a deadly hunter and an even more capable fighter.
Character's Road:
Nivis was born to those considered the last of the Minotaurs. His father, Gnarlock held leadership over what remained of their race leading many to look to the birth of his son as a sign for the Minotaurs bright future. While he did not encounter many hardships in his young life, Nivis had much expected of him. With such a mighty weight on his young shoulders, the bull took up every craft he could find. This included trades and skills from vendors that traveled the lands of Hestia.

Though, many were fearful of the Minotaurs and their mythical strength. Some travelers were intrigued by this young bull that seemed to yield endless questions. Through their teachings, Nivis taught his people the trades of blacksmithing and leatherworking. Most in the community took to the new teachings and quickly began to improve their lives. Yet Nivis' father was not pleased with his outreaching. To teach his son a lesson, Gnarlock threw his son into a cave for five days and nights.

In silence and utter darkness Nivis denied his father's grasp on the old ways that had been all but snuffed out due to the Elven conquest. On the eve of the sixth day, the young Nivis was let out of the cave. Yet upon his return, he did not yield to his father. Rather, he challenged him.

Nivis was nearly forty years his father's junior, yet he had been taught different methods of fighting by a few of the outsiders he had found. The battle was long and bloody. But in the end, Nivis stood over his father, the victor, and chieftain of the Risen Forest clan. As he set about preparing his people for a brighter future he was not prepared to receive the call to aid Orthstein and Hestia only eight years later.

Appearance:
The first is an image of his father who is still alive with the shield that Nivis now carries. 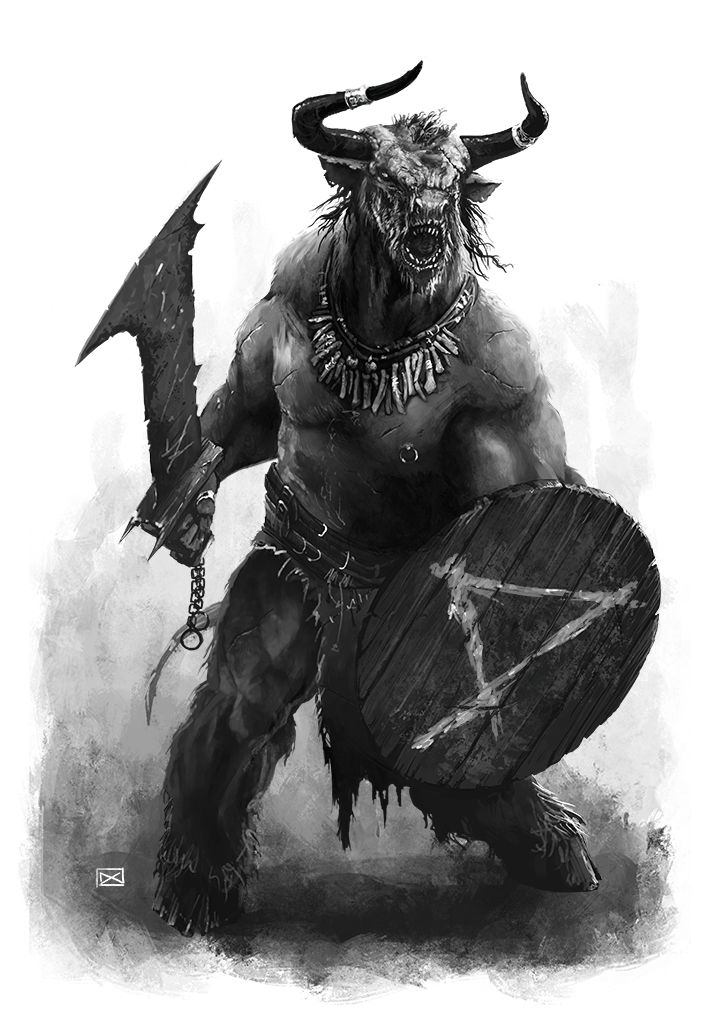 The second is an image of Nivis. 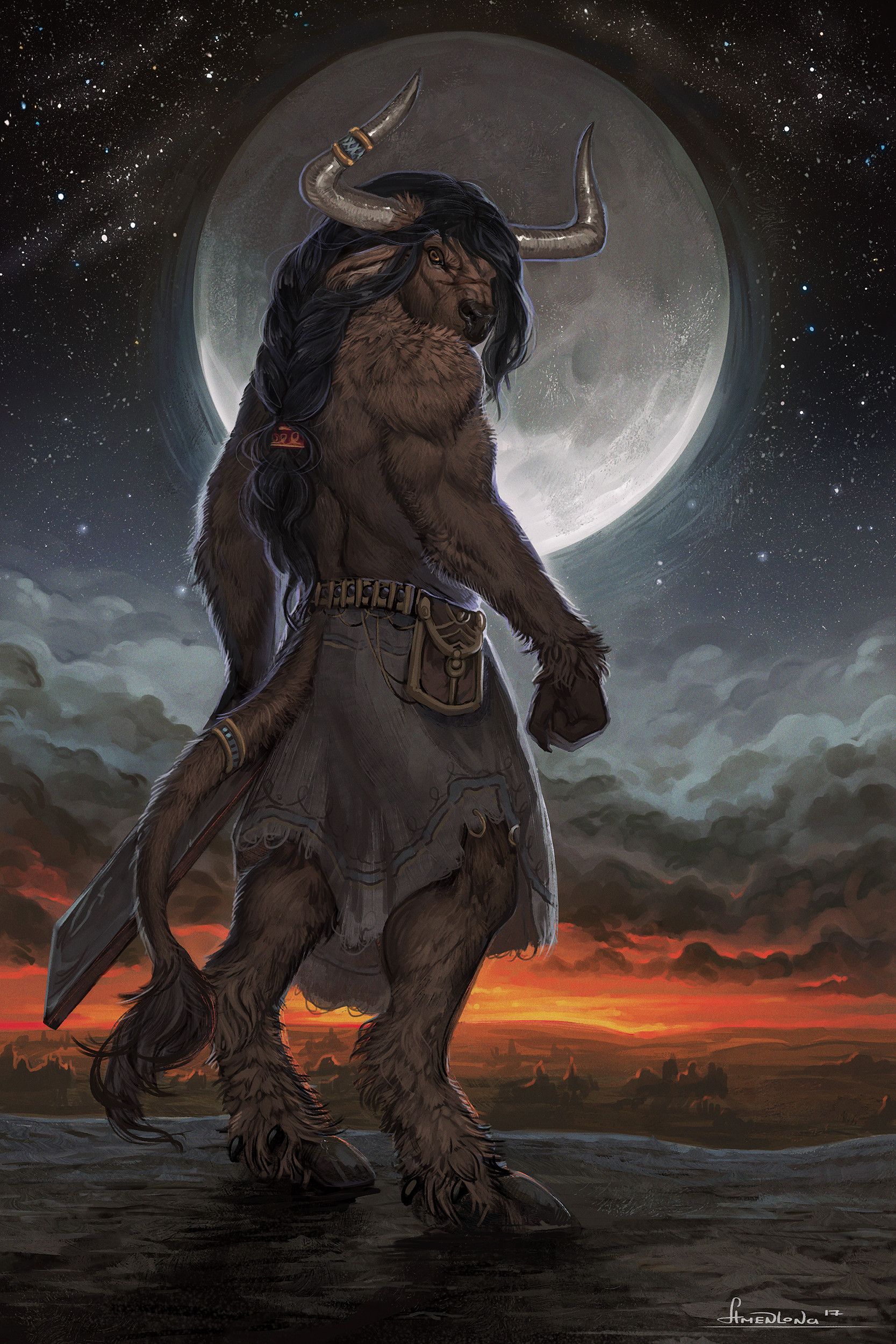 Extra:
While Nivis pushes his people to adapt with the world, he still carries a small totem of his ancestry in the bag on his hip. This heirloom, considered a good luck charm, was given to him by his mother a few days before she passed away. She died when he was only 5.
Most Minotaurs stand around 7 to 8 feet tall. Nivis is nearly 9 feet tall.

Woot woot! I got some boots!

Honestly, I'm happy you like it. Took me TOO long to come up with just the race.
XD

Character Sheet
Name:
Gael Cisco
Age:
20
Gender:
Male
Race:
Elven
Occupation:
Cadet of Hestia's military(Infantry).
Scholia Class:
N/A
Equipment:(Important items of whatever your character carries)
Character's Road:
Gael represents Hestia. From birth til now it's all he's ever known. His story is quite similar to his peers. Gael grew up in Hestia's poorer areas. His Elven blood. A single child, in a single father household, his mother passed at an early age during a time of spreading sickness. His father worked the mines outside of the city leaving the young boy to his own. A delinquent, and a thief. Running close with a group of younger thugs, he met his now best friend Richter.
Appearance: 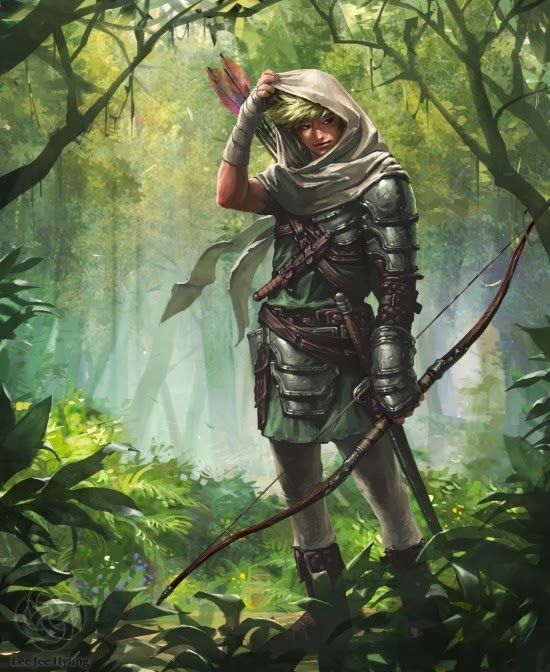