by syntheticdeity
Welcome to New Columbia, the Glistening City. With the land grants that the United Nations gave us, we’ve created a city that’s outside of Earth’s sphere of corrupt politics. This allows us to create technologies we never could back on our own blue marble. Cybernetics to help crippled people, new medicine to treat diseases previously untreatable, VR Games that feel real.
The opportunities brought to you by our sponsors, Olympia, Sens, and the Weller Brothers are near infinite! With no taxes to worry about, and no strict regulations that keep you from pursuing your dream, New Columbia offers you a place you can really call home.

The perfect lie. Promise a future and a place to live a dream and anyone will at least grasp at the chance. The truth, however, was perfectly simple. It wouldn’t take a genius to figure out, with a lack of strict regulations, relaxed supervision, and combine that with multi-billion dollar companies? The result is a depressing concrete jungle with towering skyscrapers for cheap housing and cheap offices, large square buildings made for factories and labs. The cherry on top? The massive citadel at the center, dwarfing any building known to man.
But the city grew, adding on to the corporate-owned hellscape. Soon districts were formed, each named after the company that owns said district. Laws vary district by district, some are more strict with curfews and what people can and can’t do, and others are extremely lax with little regulations. But the only thing that was kept in mind while making the laws was “How do I keep them working?”

July 17th, 2133. 76 years after the first colonists landed.
The Olympia ship OCS Lilac was struck last night by an unknown dark vessel. Witnesses report that the vessel was similar to a tugboat in shape. The unknown vessel was reported to have simply appeared with a flash of light, already flying at great speeds, before tearing almost straight through the Lilac and disappearing once more with a flash of light this time leaving behind a streak of what appeared to be blue plasma. At this time it is unknown how the vessel seemingly appeared and disappeared, and an investigation into the crash has already started.

Olympia and the other larger companies seem to be making a bigger fuss about this then they normally do. The outer districts have been ordered to lock down the walls and only allow investigation and recovery crews out. Olympia and Sens scientists and engineers are working around the clock for an unknown reason. More guards and security bots are being deployed to patrol the streets, and a city-wide curfew of sundown is in place.

A small group of people has banded together, planning to leave the city and investigate the crash themselves. Why? To escape work, or to find something valuable enough to get out of debt, or maybe they’re an agent from the Syndicate to see why Olympia and Sens are making such a big deal out of the crash.
.
Welcome to New Columbia, the City of Broken Dreams.

This is going to be an adventure with a mix of mystery tossed in set in this cyberpunk dystopia. Most character ideas are acceptable, with live human experiments running rampant, new AIs and robots being built every day, and organizations with questionable end-goals. I would however prefer that characters aren't killbots or some mega-enhanced assassin- or an assassin at all.

A miscellaneous note that I couldn't fit in the intro:
-The Syndicate is the largest organized crime ring in New Columbia, their goals are unknown but they’re speculated to want to expose inhumane acts that have been perpetrated by the larger companies.

And finally onto some rules
1. Follow all RPF Rules and keep in mind this is a PG-13 forum, lets keep it that way.
2. You're welcome to use your bbcode wizardry, as long as the text is readable and understandable.
3. No auto-hits or power gaming.
-There shouldn't be much combat either.
4. If there are problems, bring it up with me or if it's severe enough- a mod.
5. Enjoy yourself.

I'll take a maximum of 6 people, and a minimum of 4. I will not have a pre-formatted CS, so you can go hog wild with your own. My only request is that if your character has augments, please mention them. Any questions can go here for now, since an OOC and CS thread will be posted with the RP.

by illirica
I am absolutely in for a cyberpunk dystopia.

Physical Description: Still mostly disgusting human parts. 1.73m, 64kg (1.8 kilos cybernetics,62.2 kilos disgusting human parts). Full optical replacements on both eyes, left eye is a good piece with infrared and extraviolet filters, as well as color shift, zoom functions, and overlays. Right eye is standard trash-ware, 20/20 vision and nothing else, will replace with a good one as soon as I have the cash. Wanted to have one really solid eye rather than two mediocre ones. Tactical sensory pads on all fingertips allowing for substance analysis as well as system link touch typing and references. Mental augment allowing data storage and retrieval. Hope to replace everything else when possible.

Biography - Brief: I don’t like talking about it. Most of my life was just spent waiting to get old enough and strong enough that I could fix everything that was wrong with it, starting with me. You know how some people say their body just doesn’t fit them? That’s me. I’m an AI - or at least, I’m supposed to be. Why I got a disgusting human body instead of a decent chassis, I don’t think I’ll ever know. I just know that I was meant to be an AI. I’m trying to fix it, but apparently insurance doesn’t cover that sort of thing, so that means I have to earn enough cash that I can replace myself piecewise. I’m good with computers - really good with computers. It’s probably because I’m supposed to be one. Anyway, if you need any digital wizardry done, I’m your person. I started doing investigations because when people want to know things, they’re willing to pay. Admittedly I do a lot of figuring out who’s having disgusting physical relations with who else (I’m getting the hang of storing that info to my short term digital memory only so I can delete it when the cases are done, because there are some things I just don’t want to see. Ever. Yuck).

Sometimes I get some good cases, though. And there’s a lot of interesting things out there that no one asks me to investigate, but I like to take a look anyway. Maybe one of these days one of those cases will get big enough that I can get rid of my body.

Ideally, without getting rid of me in the process.


Name: CYB3R "the three is silent"
Age: "Dead"
Height: 5'9
Weight: "No"
Hair Color: Blue with green and pink highlights
Eye Color: Pink n Green
Special Features: Cybernetic eyes, includes night vision and infra red. Horns. Glowing pink blood, because there is a operation for anything these days. One cybernetic arm from elbow down with a retractable wrist blade
Skills: "Hacking, theft, curb stomping, lying and I'm not the worst fighter or shooter out there."
Company Ties: C0]\[TR0]_ (that's control) more commonly known as the Ishikai Family

History: "Long ago in the land of the rising sun a girl was born to a devil and a harlot they named her crystal. The life made by a drunk and drug addict though wasn't glorious. A low rate thug and corner worker was not something to build a life around. So the young jewel took to the web, the escapism of cyberspace. By sixteen she was hooked, no high was as inviting as the ones from just good VR. No chase was as good as trying to crack coding. By seventeen she was noticed by the Ishikai family.

A crime organization that's gaming software netted enough funds some said they could get away with murder. They took Crystal in and for three years trained her to be what they wanted. A vr addicted thug for their intentions. Someone who would do anything to be plugged back into the server for a few hours. They gave her the implants to do her job and shrug off pain some. Eventually going so far as to remove her arm and give her a blade to use. They pronounced her dead two years ago and now she is just known as Cyber. A twenty two year old woman who's more criminal paid in stuff to do during down time then with money.

by syntheticdeity
nvm you're good too, Azra

by Azra
Was on discord but will put here to. Yeah more thug, enforcer odd jobs etc not assassin as this didn't seem that kinda rp

by Cole Faux
[Apologies mine isn't as fancy as the others, hope it still works out fine.]

Name: Satoshi Mogaru
Identity Number: 11701
Subject: AE-241SG-42AXG
Role: Infiltrator
Success Rate: 86%
Code Name: Miniature
Sex: Unknown
Preference: Unresponsive
Bio: The operative referenced as Miniature has always had a place among us here at the organization. The only major issue we have run into with this operative is the lack of desire for enhancements. So far, the operative refused any implants offered only finally caving in and receiving an arm implant. This implant was only accepted several months after they lost the arm in an accident referred to in case file 1-002-EZ24. Miniature despite this rarely fails to use his wits to get through whatever situation they may find them-self in. Though they do not acknowledge the cyber implants inserted into their brain upon his arrival at the Base of Operations. These implants however, have enabled him to mimic the vocal fluctuations of any individual he may encounter. This has proven severely useful such as in operation file 2-931-TEX4Z. The mind implants have also enabled them to unlock a sort of sixth sense, as they usually feels some kind of warning prior to danger.. often time calling it out over their implanted radio. Miniature on record has not fully utilized their newly enhanced armed sticking only to using it as a normal arm. Thus far, ignoring the built-in lockpick feature, built-in repeater crossbow and lastly the port access. The last of which is the most important as it enables the operative the ability to link their mind to any computer system and for lack of a better term enter it.

Miniature is a human sex unknown, age is roughly 17, maintains a calm head in most situations. They has shown no interest in any partner when offered one by the organization. Turning down several female and male partners claiming them to be unsuitable. Operative has lost connection with the radio, believed to have self-terminated his frequency. This is believed to be due to the fact they were all cyber-enhanced individuals more research required on that field. Image of the operative in files below, Warning: operative has gone AWOL. Orders: Return to organization alive. 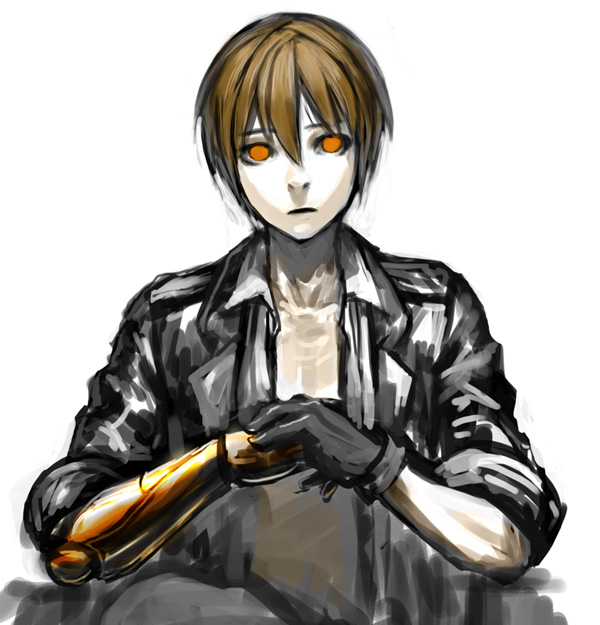