by YunaRen
Okay it been a while since I roleplay and honestly I was wondering if anyone be up for cute girlxgirl RP. Here a story I have in mind for our RP if your interested.

Basically our characters have both met each other children over summer break years ago when your family was visiting relatives or something. Though as a child my character was a rather ruff and tumble kind of girl. She had very boyish haircut, ran around in her older brothers old hand me down and came across rather boyish. You were both rather young so you just assumed my character was a boy since you had no reason otherwise and became close friends over the summer.

After that your family no longer returned to the town over summer break but years later when you were in high school moved into town. You transfer into her class and she really excited to see her old friend from childhood. Though over the course of time my character had grown out her hair and become more feminine, not to mention she is no longer apposed to wearing girls clothes or make-up. So of course you don’t you don’t recognize her as your friend from childhood. You later try introducing herself to her, but she gets upset at you don’t remember her and seems to get angry at you for no reason. 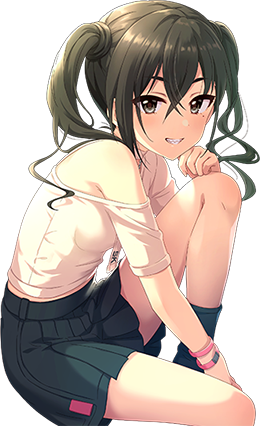 Bio: Sora as a child really looked up to her older Brother wanting to be super cool just like him and often imitating every thing he did. So when he started doing mixed martial arts she did the did the same thing. She refused to wear any girls clothes her Mother bought her and insisted on wearing her brother old hand me downs. Her Mother at least tried to get her to grow her hair out but Sora insisted long hair only hinder her in combat. Sora also like her brother hated seeing kids get picked on and would often challenge bullies twice her age and typically win when it came to a fight. Over the years Sora friends have mostly only been boys with her one female friend being a girl who came to visit for the summer making her a very important person to Sora.

As Sora grew older she no longer felt like she had to be completely like brother, no longer feeling the need to pretend to be completely like him. She also seemed to open up to the idea of growing her hair out, wearing a little make-up and dressing in clothing. Though she was still a rather energetic girl who studies mixed martial arts, playing video games, and even still gets into fights with guys every now and then. Though she also secretly like fashion and is interested in trying on pretty pink dresses and girly outfits from time to time. Though she never as she believes they wouldn’t suit her.

by CrashJr
Does this CS work as your counterpart?

Sexuality: Straight (she'd never had an attraction to anyone before so she just assumes she's straight). 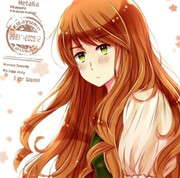 Bio: Quinn's life after her friend (you) stopped coming to town was a bit of a bore. She spent the next year just kind of going through the motions, that was until her parents figured that she'd be happy with playing a sport. Soccer, Softball, Basketball, none seemed to help with her depressive state. It hadn't helped that she began to grown taller, by the time she was in middle school she was around 5'9. This caught the attention of the basketball team and she was quickly convinced to join. After a year of playing she'd become the all star of the team and was asked by a private high school to join them the following year, she accepted because of her parents and friends begging her. She wasn't much into the sport nor really cared to play as she had found a passion in cooking by the time and wanted to become a Chef, but she let the other's in her life lead her to the path she was on.

Her freshman year she seemed to finally hit her peak at 6 foot tall and was a star in school. Everyone knew and loved her, but she didn't care about the other's really. She just went along with things and let other's lead.

by YunaRen
Ah yes I think she will make a very good match for Sora so she’ll work just fine. Though before I write the starting post with Sora transferring into Quinns private school. I just have two questions. One since this is a private school I assume they wear uniforms? If so do you have an idea for what you want them to look like? If not that’s fine I can easily make one up just wondering. Also since there meeting as a child is an important part of the story do you have any idea of what there meeting was like?

by CrashJr
You're welcomed to make the uniform if you'd like, I didn't really have an idea in mind for a uniform.

Yeah that seems like a great meeting story for Sora and Quinn so will go with that. I'll write up an opening post sometime tomorrow I'll post a link here when I have it up.

by CrashJr
Alright be looking forward to it then

by Phoenix1890
Are you still looking for a partner?