by The Envoy
Omaten himself finally looks about ready to take a swig of the drink when the mystery 3rd eye fixates squarely upon him.

INSTANTLY after that point, both he and his semi-corporeal friend by the door IMMEDIATELY lock eyes onto it, it feels immediately as if some ghost-like force was staring through it, rather than at it.

And then Omaten himself traces it back to whom has it.

"...You." He states in an almost monotone voice, then blinks behind the hood once or twice.

"Fascinating." He then utters, mostly ignoring the hostile vibrations of the tall newcomer and others, even the blank book which would have totally entranced him ordinarily seemed like a minor artifact compared to this encounter as far as he was concerned.

The other multi-dimensional concept-bending being seemed to remain fixated on the third eye itself, also unmoving, also unblinking.

What was most eerie was how quickly the two of them both stared back.

..They were linked, strands of energy were between all three beings.

Lots of them, particularily coming from the Giant Rainbow Sphere above the whole building, however, she seemed uninterested by this encounter even so, remaining monolithically motionless.

Omaten then spoke up, to Tahki in particular. "Identify yourself by Alias or Sphere of Origin, if you would?"

by GUVII
Tahki sits there for a moment, then slowly looks up towards Omaten then looks up at his 3rd eye "well, this is unnerving..." Then she looks up at the sphere, seeing though the ceiling "huh, so you have one too..." then looks back towards Omaten "yet we are different, we are not the same." A similar sphere rest within Tahki and Moon, strands of raw energy branch from their cores like roots of a tree, Tahki being the most dense of the two shows that she's been around for a very long time, as for Moon, her core is more defensive towards the values of life, but yet untapped energy lingers deep within, as well as a darker side of her that is corrupt and evil yet understanding to Moon's will.

Tahki quietly sighs and dust herself off, she stands up from her chair which is quite small, while being shorter than Moon is uncommon, as Moon herself is 1.5 feet tall. "The name is Tahki Rose, My origin is for me and Moon to know, I can tell you but understanding it would be unlikely as we both traverse the gates differently... if that makes sense." She pauses for a moment and looks up at Moon "this here is my friend Moon, she is a guardian of Life and my friend. As much as I would like to continue this chat... I think your friend there with the book, you've might had offended him." Tahki stated while slowly gesturing towards Zadok "sorry for my 3rd eye being fixed upon you, it's... like my guide in some ways, finds... things. Sometimes stumbles into the wrong places" she added before giving a polite bow.

by The Envoy
"Offense? ...I would offer apology to him later onward, what you consider polite and impolite remain difficult understand to me."

"I suppose it is fair to keep one's sphere of origin to oneself as well as one's name."
"You strike me as an older among the group, i find this of particular fascination, to meet an older soul is gratifying in more ways than one for i."

Then he took note of her.. particular by-his-metrics bow.

"Fret not of it, miscommunications are not unfamiliar, on the other hand."

"..The gates.. Do you speak of a Gateway across Dimensional or Geographical Locus?--"

"..never mind, i understand the crudeness of this verbiage, attempting to make it legible in the truest senses of reality is akin to throwing one wood tool to what human beings would refer to as a 'Hurricane' and expecting it to dissipate said hurricane in totality." He added in an almost.. dry-humor kind of tone.

The other, more semi-corporeal figure by the door fixates on her now, that sensantion of being stared through moving to Takhi herself.

The Titanic Mothersphere Rainbow Being above finally reacts, seeming to shine a just-barely visible ray or beam of multi-colored lights onto the whole structure, anyone with psychic or mystic training would be able to tell the entire area was being non-invasively probed, and so was everyone within.

anyone using technological instrumentation would not be able to read it whatsoever, it didn't give off any kind of emissions, particules, or even energy it seems, for all intents and purposes, this ray did not exist according to any kind of advanced tool.

"Oh--" And Omaten looks up at her for exactly that same time before blinking.

Then he refocuses on Tahki.

"Your Vibrations are unclear to me, i cannot tell if you bring query or not."

"if no, i will return to the entity aforementioned which you speak of." 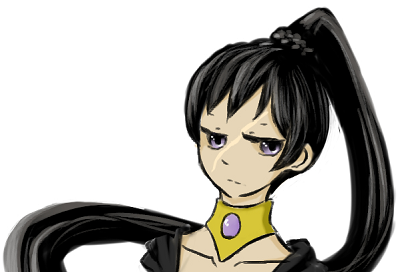 The door to the inn opened as a cloaked form entered. The cloak, itself, was splattered with dry silver. Sighing tiredly, Kali lowered the hood, her dark violet gaze scanning the room momentarily before she turned and closed the door behind her. "I'm still not used to seeing the Inn here.." She noticed there were people she was unfamiliar with, but that wasn't anything new, now was it? She wasn't sure why she was still surprised by it. The Shrine always drew people in who needed it, anyways, so she was no stranger to new people. One even seemed to be some sort of... pretty winged sphere. "Pretty..." She commented to herself as she took off her cloak, resting it over her arm. The silver scar across her face reflected slightly in the light, as did the dried silver on her cloak and long black dress. The few places on her dress that shown silver were around slight tears in her dress seemingly from something sharp. She sighed lightly as she moved towards her usual table. She had to admit she was a bit tired.

by The Envoy
While Omaten was engaged in conversation, his two Multidimensional Companions were not.

The Four-winged Rainbow Mothersphere above did not react, but the Semi-corporeal being with three eyes did, locking his gaze onto Kali.

A Telepathic voice, seemingly omnipresent and apotheonic, echoed from this being specifically toward her, seeming to come from everywhere for a moment.

An image of the torn robes in question was impressed after that.

He slowly phases and warps, seeming to more glide along the floor rather than walk along it, having no visible feet or even arms, the Orange and indigo-eyed being tilts it's Phasing and shifting 'Head' left somewhat, upon closer inspection, the etheric being was Golden in Coloration, emitting a blue-like light near where the equivalent of a 'heart' would be akin to an angelic glow in a radiant manner, illuminating the room further still.

Cryptic seeming, but then again, all three beings whom came together seemed to be that way.

The girl lifted her head when she heard the unusual voice, then looked towards the figure who came towards her. Too much warfare... a statement that was all too correct. It was a subject she was very familiar with it. More familiar than most due to their usually shorter lives. She gave a weary smile. "Just a part of my existence..." She replied, sitting back and looking the figure over slightly. Definitely not the strangest being she ever met, but was one of the more uncommon types. "It has been the case since I was a child... and it is something that will continue until myself or another species goes extinct... and neither will be happening any time soon..." She had to admit, though, it was nice to have some down time when she wasn't fighting for her life, or the Crystal. The Crystal Prison, itself, gave off strong evil vibes, from the evil gods trapped inside, but it was all subdued by her own soul, keeping them in check and from wreaking havoc.

by The Envoy
"We would ask you Contemplate this as you continue in aforementioned existence."

"It has been our collective consciousness experience that great civilizations of peace become great civilizations of war, and back again, in a timeless cycle, as many mind/spirit/body complex totalities in this dimensional locus seem aware of already, there are times of great and seemingly unending conflict, where peace is all but a foreign thought unintelligible to the traumatized and injured of mind, or body, or spirit, or some combination of the three, but likewise, there will be an eon where warfare and thought of harm to any other-selves will simply not exist in the due effect you call time, and while Positive and Negative are Inseperable and Forever, Peacetime Cycles have a tendancy to last, shall we say, A trillion, Trillion-fold moments longer than times of warfare."

"The Four Cycles permeate all of Creation."

by The Envoy
"We State an additional surplus detail."

"There are Grey Zones in-between these grand cycles, Descending Dark Ages and Ascending Light Ages, as you would approximately term them, exist in similiar measure."

"Yet by method unintelligible to those i will mention, The Universe is Biased toward Kindness, shall we say, as we have already witnessed virtue's survival even into the, shall we say, most armageddon-esque of millienia that is characteristic of the Iron Cycle, whereas sin has no home in the Golden Cycle."

And then he took note of the Presence of hostility.
"A query, what is that?"

An impressionate 'Feeling' of similiar hostility is projected, in liue of simply pointing at it.

ARCHON
THE UNIVERSE GUARDIAN
She looked at him quietly. The manner of speech was unusual, but it sounded like he was trying to reassure her that things would end up getting better. She smiled lightly, but before she could say anything, he asked what something was. Even though he didn't say anything about it exactly, she knew what he was referring to. "Well... simple explanation, is that it's the prison of five evil deities that want nothing more than to destroy..." She answered, sitting back and smiled a bit. "I suppose that makes me a warden."

by The Envoy
"The Negatively Influenced?"
"To -- as you say -- Warden those of Negative Polarity is an Extroadinarily Difficult Honor-Duty, Much less those which have unlocked denser beingness of existence and consciousness than one's own, i express well wishes upon this journey you have selected for yourself."

The Rainbow Sphere above the whole structure then emits some kind of otherworldly-wind-like sound for a moment toward the non-corporeal entity speaking psionically.

To Those with telepathic capacity, there would be a laser-perfect focused telepathic thought sent from the Sphere Entity to the Non-corporeal individual speaking to Kali, this thought was incomprehensible to the seemingly mortal mind, it'd be like trying to read an eldritch-creature's thought processes, but a positively oriented one rather than a hostile one's, it would not be maddening, it would simply be like gibberish, Lots, and lots of psychic gibberish packed into one lone thought, literally vibrating too highly for the mind to process.

But only for a moment.
(For the more mathematically precise of mind or to those with technological recording devices, it lasts -exactly- 9 seconds.. again, eerie precision down far, FAR beyond the millisecond level)

"We apologize, our assistance would likely be infringement even if not offered."
All times are UTC
Page 80 of 81
Powered by phpBB® Forum Software © phpBB Limited
https://www.phpbb.com/