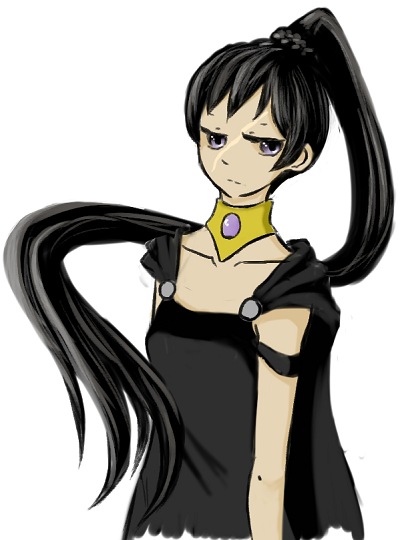 AGE:
Seventeen in her years, hundreds of thousands of human years

HOMEWORLD:
Serenia (Still exists, but its people are wiped out)

PERSONALITY:
Kali is more mature than what her appearance would suggest. She cares for everyone in the universe, and is always hesitant to fight to kill. She understands that sometimes people do have to die, but she wants it to be only those who can't see the light.

BIOGRAPHY:
Serenia. A perfect paradise crafted by ten deities known as the Guardians. The land is covered with pale green grass, with a rich purple sky. Trees made of opal litter the landscape and gather in large, glittering forests. The flora and fauna are unlike anything seen elsewhere. Crystalline plants and animals, as well creatures found in human mythology. These creatures lived peacefully alongside the Serenians, the inhabitants of the world. This was a perfect, peaceful world with no pain, suffering, war, or greed.

Things remained this way, watched over by the deities, until millions of years later, when five of the Deities became bored with the perfect world. They grew to be annoyed, and betrayed their brothers. They left Serenia, as the world became known as, and created their own world, Chaotica, in opposition to the world they once loved. They also altered themselves, and what they represented, to directly combat their brothers. They were now dark deities, creating a race that knew only darkness, hate, and war. The intent? To destroy the Serenians.

The Chaotians, the race of the Chaotica, invaded Serenia. The war that ensued was like nothing that anyone had seen before. Even though the Serenians never seen war before, the deity of protection, Potesen, gave the people what was necessary to fight back. Both races were on par with each other, and there were equal losses on each side.

After millennia of fighting, the evil deities, now known as the Destroyers, decided to step in. In order to save their people, the remaining good deities used their powers to seal their brothers within an opal crystal. The crystal turned completely black due to their corruption, and the Guardians bestowed it upon a Serenian, binding her soul to it and tying its fate into her own. In order to ensure that if anything were to happen, the Guardians did the same with themselves, sealing themselves into a crystal which became bound to another Serenian. The Chaoticans left Serenia, and the two Crystal Guardians created a barrier that would keep them out for good.

All was peaceful until Mysterica was born, the daughter of the King and Queen of Serenia. She was born with violet eyes and black hair. The coloration was a sign of the aptly named Dark Crystal. The Guardians of the Dark Crystal had always been just a random Serenian born with it, who often became reclusive and no one ever saw them. But this one was going to be the future queen, and the people didn't like the idea. They still believed that the Guardians could end up corrupted, so what would happen if their leader became as such?

It wasn't the people that were the problem. Something happened to the King, Zeig. As Mysterica grew, he had started acting strange. Something had been unknowingly whispering to him, promising him power. When Mysterica was four Serenian years old, Zeig committed the first evil act a Serenian ever had done. He killed his wife, and intended on releasing the Destroyers from the Crystal. He turned and sliced his daughter across the face with the opal blade that he had used to murder his wife, leaving her with a large cut.

Unable to figure out how to unbind the crystal from her soul, the king took his daughter to the enemy, where she spent thousands of years be subject to their attempts to release the Destroyers or gain control of the crystal. It was torture, but the girl still bought her time. She found her opportune moment, and unleashed the power of the crystal to destroy her restraints and escape, using teleportation to the place she had always seen in her head, that she longed to go back to.

But what she was met with only broke her heart even further. In the streets laid the bodies of her people, having been horrifically slaughtered at some point during her captivity. Their bodies were barely even cold, due to the fact that they don't decay. They just looked like they were sleeping. But she saw how her mom looked. This was just the same. And she knew who was responsible. Her father had come back and broken the barrier crystals that protected the world, letting the Chaoticans in. And it was all her fault. If she hadn't been born with the crystal, none of it would have happened.

She traveled around for some time, going from planet to planet, but could never stay long. She was always attacked by Chaoticans led by her father.

Recently, she was flying between planets when she was attacked by DeathWing, the Avatar of the Chaotican god of Destruction. He slammed his claw into her, trying to grasp onto the crystal, but only managed to crack it before she ran him off. She was too injured, though, and came crashing to the nearest planet.

WEAPON::
The Guardian Blade
This opal blade was blessed by Potesen, the god of Protection. It has been with Kali since she had returned to Serenia to find its people wiped out. She believes that Potesen himself led her to its resting place. Opal is the best weapon against the Chaoticans.

MAGIC::
Her magic stems from the Dark Crystal, allowing her to call upon the dark god-like powers within

Nesetop - The Dragon of Destruction
This is the power Kali relies on most. She mainly uses it to create dark energy blasts she sends at her enemies. They can be short, thrown blasts, or concentrated blasts. She keeps this toned down to small blasts designed to hit a single target, not wanting to destroy anything else. When necessary, she can focus with both hands aimed at a target, charging the energy and firing it out in a very destructive blast that will not only damage the area around her during charging, but anything within the span of the blast, as it usually skims the ground. When used at a greater capacity, she could destroy fleets of ships easily, and possibly planets. She already caused the destruction of her people, though, so she only uses this in dire circumstances.

Amsant - The Basilisk of Chaos
Never in her 200,000+ years of life has she ever used this power, and doesn't even know what it is.

Aenak - The Chimera of Corruption
Never in her 200,000+ years of life has she ever used this power, and doesn't even know what it is.

Ankas - The Cerberus of Hate
Never in her 200,000+ years of life has she ever used this power, and doesn't even know what it is.

Amukam - The Wraith of Death
This is one of the most fearsome of her capabilities. While she can call upon Nesetop for raw destruction, Amukam allows her to be able to decay everything around her or a target. She can turn metal into nothing but rusted dust, or people into ash, decaying them right in front of your eyes.

Beyond her use of Nesetop's destructive blasts, Kali has never used the other abilities. She knows that they could corrupt her with their use, and avoids them at all cost.

Flight:: Kali has the ability to fly without a spell or assistance.

Healing:: Kali is capable of healing critical wounds, diseases, as well as physical afflictions such as blindness (depending on the source of blindness). She can't regrow limbs or revive people. Her blood also carries these properties, though depending on the type of person who somehow had her blood introduced to their system, it could either help them if they're good people, or possibly kill them if they're evil. If they're particularly strong, and evil, they could survive, converting the blood to Chaotican blood. Either way, they would gain enhanced strength and toughness, though would see 'hallucinations' of an unknown being.

Teleportation:: Kali is capable of teleporting herself or others across distances. She can teleport herself across space to a place familiar to her, like Serenia. To teleport more than one person, it takes a good deal out of her. And depending on number and distance, she could be weak for quite sometime. She has to know the place and been there before in order to successfully get there. She can use a picture, but is very, very hesitant to use that method due to the possibility of getting it wrong. 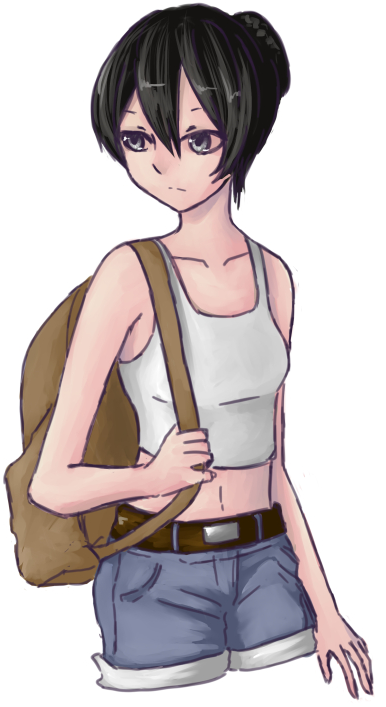 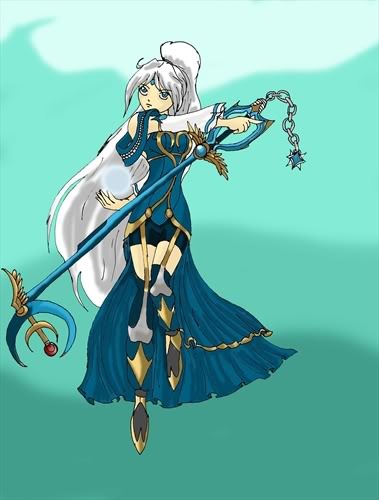 She has a long, silver scar across her face.

She blames herself for what happened to Serenia. She avoids people because she is afraid that if she becomes friends with others, she will be the cause of their demise.

Only her father and Death Wing calls her Princess or Mysterica, and it's always done to mock her, to remind her of what happened to her people.

She will refuse to talk about her past, or where she came from, if ever asked.

Re: Kali, The Dark Crystal Guardian