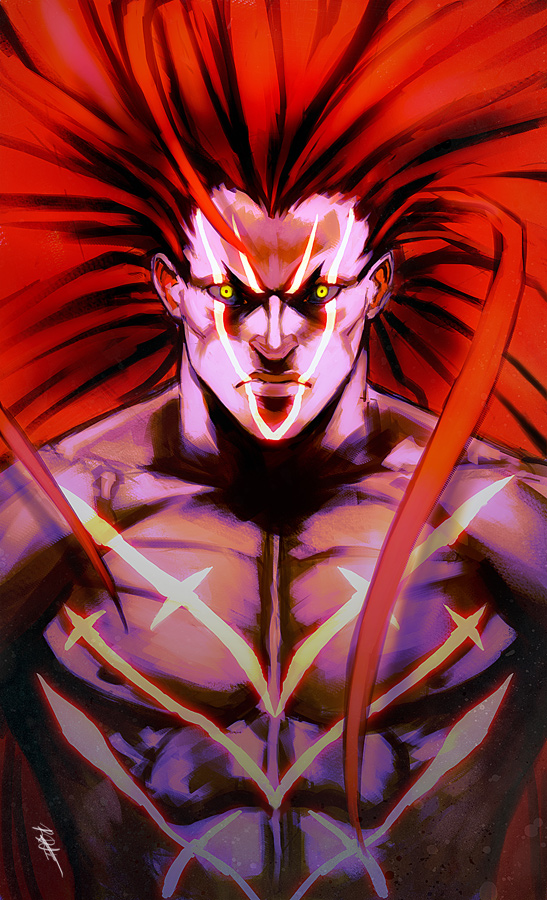 Name: Dacey (Call him this at your own peril.)

He is called many things. A god. A devil.

He cares not refute these accusations. So he accepted the title of God-King not out of self declaration but out of others deeming him such. In all reality he does not care as to whether or not he is a god. But he likes the control. He likes the idea of someone strong taking over the weak.

A revolutionary alone cannot meaningfully change the world. They can only hope to destroy. To topple a system and then replace it with nothing. What the world needs more of is a conqueror. Someone like him who quite frankly beat the small part of mexico into submission and then forced it to get better under his wise rule. It stand peaceful empire today. One built on blood, slavery and stolen technology.

But a peaceful place none the less.

The tale of Amaranth begins with a baby boy by the name of Dacey who was born during the peak of the Mayan Empire. He was born different from the other children and was thus dubbed functionally a demon. One who would fulfill the prophecy of being one who would one day come back and wreak bloody havoc upon these lands as he came back conquer it. As it did turn out, he did. But not at first.

The boy remembers only having animals as parents. And he remembers devouring a great many creatures and things. And he went from being the bottom of the barrel to being the Apex predator. Here in these woods he lived for over two decades before he ate a man. Simply put, he grew and grew and grew. Until finally, while he was not able to be ultimately killed, a hero collapsed a temple on him and made it into his tomb.

Until he was buried out again in a new age. An age of futuristic technology and delectable superhumans.

Genetic Assimilation: Perhaps his eeriest power, is the ability to gain the DNA of whatever he eats and to selectively incorporate these attributes into himself. This goes beyond just people and animals, even extending to micro-organisms and plants. He started by devouring the DNA of animals in his efforts to become the ultimate, amorphous life form and soon began to feed on metahumans as they became more and more prominent. This allows him to blend superpowers together, such as using superhuman durability to amplify his tiger-like retractable claws to cut through concrete.

Strength: His strength is nothing short of . Can casually punt cars multiple blocks away and can very well hammertoss a 40 ton tank some hundreds of feet away. He cannot lift objects that are excessively large because most objects are not strong enough. Speed: Is capable of moving at speeds akin to a drag racer at approximately two hundred and forty miles per hour. Usually this is done in a series of hops. The faster his speed, the more uncontrolleable his movement becomes. Durability: Has a good deal of resistance to damage from all sources. Agility: For one so large, he has understandably superhuman degrees of agility. He can very easily spin and backflip multiple times as he jumps hundreds of feet into the air

Intelligence: Is intelligent of the way of being able to learn new skills and theoretical tasks quickly. This is however tempered by having actual experience in the task and growing beyond his actual growth. But things that are relatively linear and straightforward are easy to learn.

Retractable Claws: Tiger like claws located in each finger and toe, augmented with superhuman durability to be able to cut through steel, concrete and metahuman flesh.

Fangs Teeth and Fang: The better to rend flesh with.

Camouflage: His skin can change it's color and texture to anything he desires.

Blood Freezing and Hibernation: He is capable of surviving frozen in the arctic and can hibernate during the winter like an animal if he chooses too. Though now that he does not live in the wildnerness, he

Senses: The creature man has the senses necessary to hunt down his prey without them having much hope of escape.
List of Sacrifices

Is it not a good thought to know you go on being useful? Even when you are long dead?