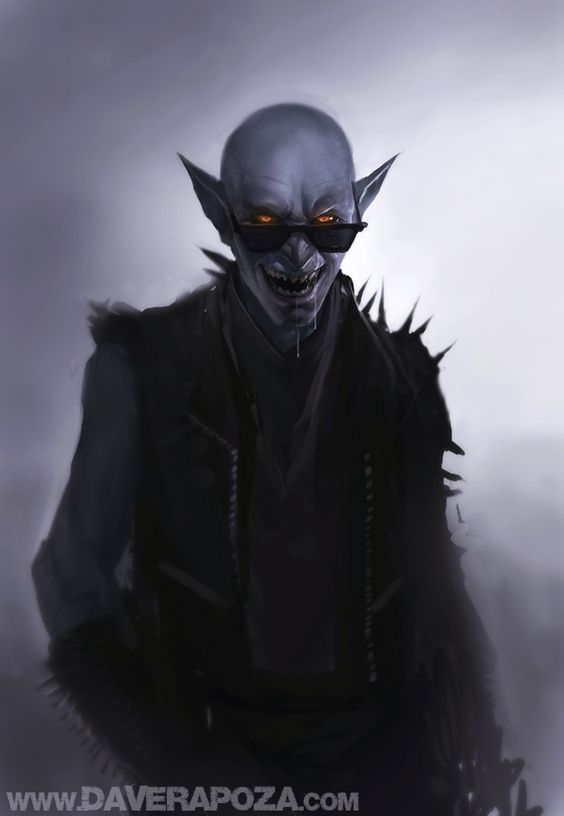 IDENTITY AND OCCUPATION
The right hand if Bashanipal himself, Vas is a shadowy and mostly unknown figure who operates in large part through proxies who tend towards the alignment of gang-bangers and corrupt politicians. It is here that someone can discover some trace of his activities. His job isn't exactly something you can write down on a paper. He simply serves Bashanipal as a "right hand man" doing whatever he needs to in order to maintain the assets the Death Lord requires to sustain himself and remain ahead of his opponents and informed.

Who Vas actually is, or was is a subject not normal explored. Most people who try find themselves abruptly dropping the case, meeting dead ends or becoming dead themselves. But some digging would reveal a link to a Chilean man involved in Colombian drug cartels in the 1980s through the 90s.
POWERS

As a leader of a drug cartel and a Nosferatu Vampire with little moral inhibition, Vas has a wide assortment of abilities which befits a vampire lord. He is able to rule over and control the territory he claims, control others, is exceptionally difficult to kill, is able beat down sheep who oppose him.
All this comes together swimmingly to create a leader who is capable of keeping hold of his land through means both universal and supernatural. He can craft intricate illusions to keep the populace ignorant and warp the minds of law enforcement and politicians to the blind eye to his endeavors or even aid in them.

Many myths and legends speak of vampires who knew their castles like the back of their hands and sensed any intruder who sought to invade their abode.

Through his Vitae, Vas may make a place truly his own, marking his place like an animal. The longer he lingers in an area, the stronger his hold over it tends to be. He is aware of everything which happens in his havens and in the areas which he rules. Information becomes a commodity as he digs up dirt on everyone and uses it as leverage or to bargain.

This fades in the day hours.

The ability to create illusions. Vas can create a mist from his body which shares his shapeshifting ability and can form most any object. Areas marked with his blood can very easily as well as manipulate the appearance of areas he claims. Reflections in the moonlight allow for most any conjuration Vas can imagine and their solid, amorphous form allows for the reproduction of scents, sounds and sensations.
• Euphoria
The concept of domination and illusion overlap. Vas can instead uses his drug like blood mist to influence all those in his area, causing them to see and hear what he wants them to do and making them more vulnerable to his influence. Only the greatest wills or (most resourceful) can resist his functional hold over the physical components of their minds and bodies being directly stimulated by Vas himself.
With his touch, his bite or even just his presence.

Vas is very at home in the dark. He blends in with it perfectly, and he is functionally invisible in pitch black darkness. This is different from camouflage as his skin does not turn black and he is completely visible standing in an all black room. He is also capable of removing light from an area for a time.

Sometimes, people see things that will change them forever, no matter what they say. Hard men who see war come back shaken and suffering nightmares. Some who see blood and they vomit.
Most people can't describe what they see in Vas's eyes. But whatever it is certainly isn't something that is natural. The feeling of shock is familiar, as reason becomes fleeting in favor of fight or flight. And the person submits before the beast with which they have locked eyes.
With his eyes, Vas may lay claim to any man and beast. The follow his every word and with this, he may communicate through eye contact or a blood bond. Vas has grown enough potency to make can make the weaker. He can order even order people to kill themselves, causing them such pain that they no longer seek to resist.
• Possession: An ability possible with any who have a blond bond with Vas. He projects his consciousness “through the blood.” This ability alone allows him to possess people who either allow him to contest them. After this, Vas is capable of of speaking through that person and acting through them as a proxy of sorts. He twists their vocal cords so they sound closely like him. The voice mimicry is not in itself supernatural and limited by the person in question.

The person usually takes a change in posture , body language and facial expression that is very abrupt. There is almost always an usual twitch before the person is taken over (particularly if they resist), but some people are trained not to or consenting
This works automatically with animals and other non-sentient beings who have a blood bond. 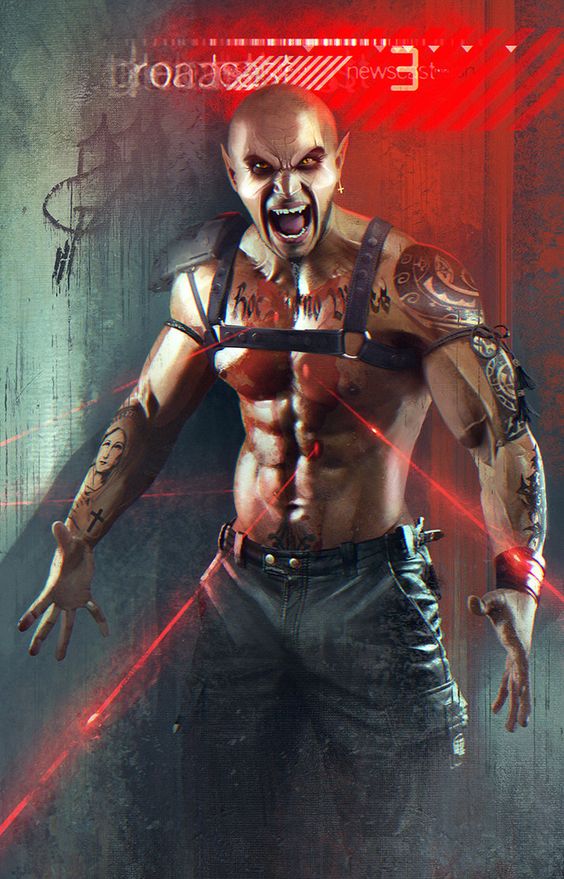 When he was a boy, Vas was known for getting the shit kicked out of them. He was small, and he talked a lot of shit. Eventually talk turned into action, and Vas was capable of kicking them shit out of others through trial and error.
His durability was the stuff of myth and vamparism has ascended it to local legend. Vas is capable of outright withstanding bullets, knives and even the shrapnel and blast from explosions. He withstands being punched through walls as though it were any other blow and has enough natural resilience to simply land and crack the concrete beneath his feet.

By focusing his blood onto a certain spot, he can take this further and make small portions of his body (i.e. his arm) invulnerable to any source of damage that isn't from fire, silver or sunlight. Even then, fire and silver deal reduced damage. Sunlight bypasses this utterly. The effected portion of his body becomes heavy and stiff.

Like all Nosferatu, Vas has an inherit resistance to external physical change. Even warping his own body away from it’s original form, costs precious Vitae to change. And even when it does change, the body yearns to turn back, and will expend even more Vitae to do so when the user stops focusing. This ability remains with him in the daylight, but he will not be able to heal.

Vas has just enough strength to beat out any baseline human being. He can flip a car, tear off limbs and dent steel with his strikes. He can shatter a rib cage in one singular kick and send bone jutting through organs like projectiles. He can lift a grown, four hundred pound strong man and pin him as though he were a child.

As a wolf, he is capable of ripping apart most any lone sheep presented to him with little in the realm of contest.

A gift from his master which suits him well, Vas is capable of forming a claw upon his hand of monstrous size and cutting ability.
The claw in question features one prominently long talon in the middle which seems less of a nail and more a smal), jet black sword jutting straight out if his hand. The rest of his fingers become claws capable of more precisely ripping apart fleshing and climbing into concrete.
Thaumaturgy
Vas is capable of specifically altering the chemistry of body to induce different effects. Spefically, the fluids of his body. This ability is ritualistic, and takes an hours notice to enact. His fangs and blood work normally otherwise.
• Blood
Altering his blood to achieve varying effects. He can make his blood have drug like properties and can alter it's potency. This can be used as a potent supernatural medicine, a sedative or can even kill a person with the effects of an OD.
• Venom
There does exist a snake that exists on a remote African island, which is said to produce a venom so potent that it can melt human flesh. Word on the street is that by tasting this snake's venom, he learned how to make this venom too.

Vas is capable of giving some of his abilities to anyone and anything who consumes his blood. This is temporary and highly addictive, able to turn people into functional junkies addicted to euphoric sensations and the power it brings. Animals turn rabid and irritable, but find these wills subsumed and unable to attack their master.
• Gift of Vigor
• Gift of Resilience
• Gift of Dominate
• Gift of the Shadow
• Gift of Smoke and Mirrors
Being a small amount of Vas' blood, these gifts are fleeting and weaker than Vas' own, usually. The more blood given (or taken) the greater the power. Logically if Vas gave out all his blood, the person would become kore powerful than he for a time.

"You, their best beloved one, are now to me, flesh of my flesh, blood of my blood, kin of my kin, my bountiful wine-press for a while, and shall be later on my companion and my helper. You shall be avenged in turn, for not one of them but shall minister to your needs. But as yet you are to be punished for what you have done. You have aided in thwarting me. Now you shall come to my call. When my brain says ‘Come!’ to you, you shall cross land or sea to do my bidding."

The other effect of the aforementioned gift.

Legends exist where Dracula would force upon humans a “Baptism in blood.” One where he force fed jis victims his own blood and made them his humam servants, who gain vampire like traits.

The result of prolonged feeding upon Vas' blood has effects similar to that of potent drugs. The substance takes hold of you, robs you of instinct and ultimately gives Vas greater control over you.

The goes beyond just being a drug and gives Vas a literal connection to the blood which lingers inside. He is able to communicate telepathically with the person, implanting messages, pictures and ideas just as he so pleases. And so , he can break people down to the point of driving them insane or ultimately steering them to serve him. He can peer into their deepest thoughts and desires, and even see from their own eyes.
This can be contested however. The person can learn to feel Vas' presence looming over them. To his potential disadvantage, they can also sense how he feels and track him down through sense alone.

The bond fades with time, depending on how much of the blood one drinks. The more the blood, the longer the bond. A few drugs can last days. A blood donation can last years.