If you haven't read/RPed with Jean before, he's kind of a creep, to say the least. If this is the kind of thing that makes you uncomfortable, I recommend avoiding him, or just PM me (either here or discord) and just let me know if there's anything you want me to like... not do. Nasty pervert man is a nasty pervert.


It was a rare condition. Still is, you know; I believe the rates are something like... one in five-million, or another factor along those lines. It's a mutation, a defect that hides in multiple recessive genes, remaining entirely undetected in those who carry it until they're unlucky enough to give birth to a child who has it. Still, when it strikes, it is utterly devastating. A short lifetime spent in and out of agonising paralysis, a metabolism so fast that your body can't keep up, muscle atrophy that turns you into a corpse long before you die... but it's something we don't need to worry about now. They run tests, of course. Parents can find out whether a fetus would have the condition and act accordingly, as is often the case with things like this. Even if they do carry the child to term, there are things modern medicine can do to almost completely reverse its effects. The child can live a happy life, free of the pain and suffering this condition causes, all thanks to the tireless work and sacrifice of the two valiant researchers who managed to find the cure: Charles and Myra Gravesend. My parents.


Name: Dr. Jean Gravesend
Alias: Splice, The Good Doctor
Age: 26
Gender: Male
Nationality: Scottish
Affiliation: N/A
Height: 6'2"
Weight: 113 lb
Appearance: Tall, worryingly thin, and heavily scarred on the chest, arms, and legs. Due in part to his pale complexion and in part to his questionable health, Jean often looks heavily fatigued, even after a full night's rest. His eye colour is different than that which he was born with (they were once brown, and are now violet), due to altered pigmentation of the iris. Despite the scarring on the rest of his body, Jean's face and hands lack any signs of damage. There is a metal plate over his skin near the top of his spine that drills through to the bone. 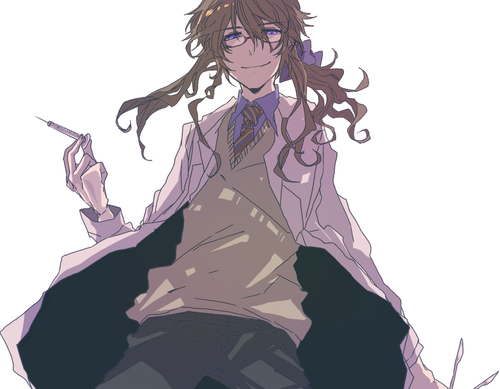 "You're not scared of needles, are you~? No? Well, we can change that, darling~!"

It wastes no time to show its face, oh no; as soon as a child is able to feel, that's when it comes into being. I was sick from birth. My cot was a hospital bed, my pram was a stretcher, and my toys were the various tubes and wires that were plugged into my spinal cord to try and keep me from seizing up completely. Still, I had my parents for company, as any child should. They were always busy with me; it seemed as though every day of my life was spent trying out a new treatment in the hope that it would work. There were a few breakthroughs, of course, otherwise I wouldn't be here today. The paralysis stopped when I was eight years old, my metabolism was lessened to a survivable level by the time I turned eleven, and my muscles finally stopped wasting away at the age of thirteen. The other symptoms were dealt with in due time as well and, by the time I turned eighteen, I was fully cured. Eighteen years. That's how long it took. That's how long my parents worked for, to find the cure for my condition. Was the recognition worth it? 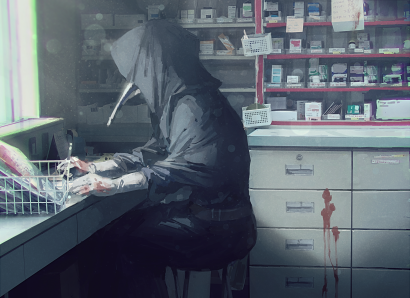 I wish they hadn't been so fervent about curing me. The procedures were painful and invasive, despite all the good they brought me; there are only so many times you can bear having metal pins stuck through your nerves, you know. I have to look at the scars left behind from all the surgeries as well. These areas of discolouration, of tough and ragged skin that makes me look like some sort of patchwork doll... they're reminders of my childhood in that hospital. Scars instead of family photographs. How tragic. They got a lot of money for that cure, you know. A lot of money, a lot of fame, and a lot of people telling them that they made the lives of their children immeasurably better. Perhaps this was the motivation behind what they did. I wouldn't put it past them.


Genetic Alteration: Jean possesses the ability to alter genetic code, thanks to a substance in his bloodstream that can rewrite the DNA of other cells. When used in conjunction with serum A-365, following any sort of contact with biological matter (e.g. skin contact, injection, inhalation), Jean can alter the DNA of the cells in that area, causing rapid mutations.

Genetic Reset: Jean's body will always return to it's standard state, no matter what happens to it. Unless an injury is enough to kill him there and then, it will heal at a fast rate. His healing isn't instantaneous, but it is incredibly rapid; Jean can recover from severed limbs, severe internal damage, and other major injuries in a matter of hours. Unfortunately, this also means that any positive alterations Jean induces on himself will also fade over time, with most lasting an hour at most. He constantly needs to inject himself with the mutagen in order to keep such alterations... but he doesn't seem the type to mind that, does he?

Indigo: Another substance Jean developed is V-394; a variant of the infamous LETHE Project nicknamed the Indigo Serum. When injected, it allows Jean to alter the neuronal structure of a victim's brain according to his words, making them obey his commands without question, believe what he says, implant false memories, and basically any other mental state that can be implied by speech. Force of will or psychic resistance is useless; only those immune to the chemical itself are able to resist. The heightened neuroplasticity lasts for an hour, in which Jean must make all of his commands and statements, but the structural changes are permanent and require therapy, surgery, or appropriate medication to remove.

The exact workings of the Indigo Serum are further explained here.

General Anaesthetic: Jean usually carries around a few syringes containing a drug that will put people under heavy sedation. Each syringe contains enough to make an average adult male fall unconscious in less than a minute.

Jean carries a lot of needles with him at all times, along with a set of scalpels and a notepad. Though he doesn't like to perform many alterations 'in the field', he absolutely does like to when in a laboratory setting. 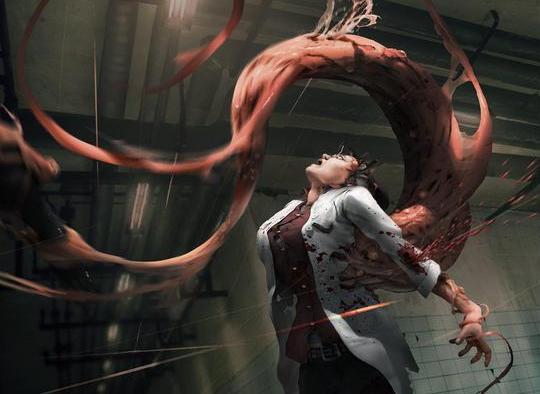 Perhaps it's in my genes. 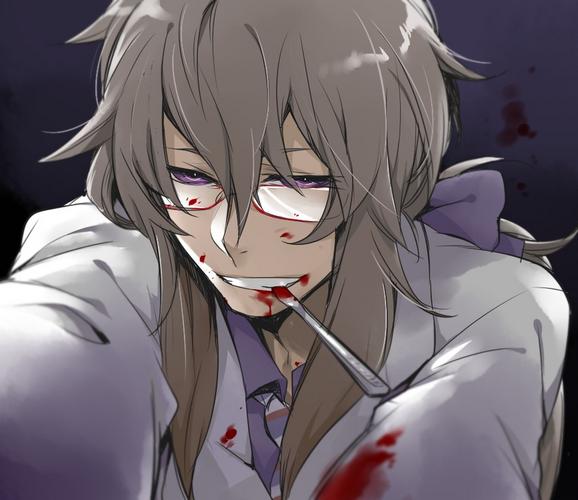 That's the face of a man who can cook a good pizza
I look in the water and fear what I see
I know it's no stranger but I know it's not me
My life is a lie that was uttered in jest
If I can't change at all, let me rest
Top

Why is he biting a scalpel blade, it's like he's trying to cut his mouth open
DJANGO_
Top

He's having a hard time cutting the pizza, I guess he moved on gfrom the pizza-cutter, to the scalpel and is now lllooking for somethsomething better
Top

Our Celtic doctor babies
I look in the water and fear what I see
I know it's no stranger but I know it's not me
My life is a lie that was uttered in jest
If I can't change at all, let me rest
Top

Canon
I look in the water and fear what I see
I know it's no stranger but I know it's not me
My life is a lie that was uttered in jest
If I can't change at all, let me rest
Top
Post Reply
16 posts