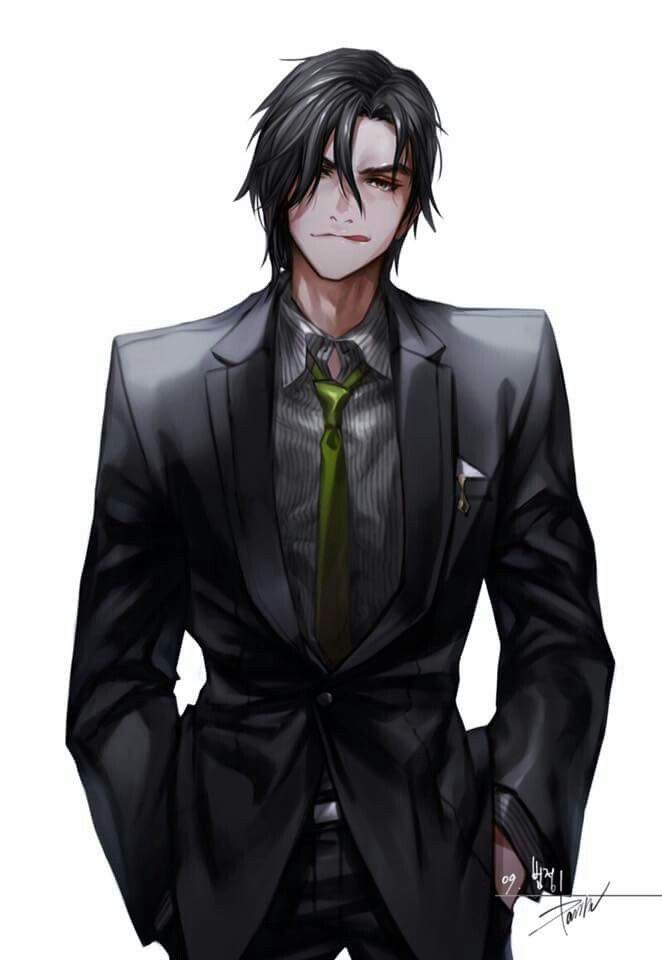 Outfit/Gear: Usually wearing a Black Business suit, will occasionally wear a trench coat for jobs, a Black Fedora or wide brimmed black hat to hide his face around others. Thick Grey or Black Pants drape over Combat boots. In his Pocket Matherson keeps his switchblade on him at all times, carrying a 9mm S&W under his suit in a shoulder holster.
Skills/Abilities, or Job: Manager of the Greyzone Club, and ringleader of the Greys. He is incredible at hiding in shadows, the Dark moving around him. Lights seem to dim when he enters rooms.
Alliance: (Grey,Dragon, or Other) Greys.
Personality: Dark sense of humor, Fairly easy to reason with however has a fierce temper if you aggravate him enough. Prone to small mood swings. Cold and calculating, willing to do anything to Keep his Gang in power.
Backstory: Growing up in several different street gangs, Loyalty and trust runs strong in his blood. At the age of 17, he was betrayed by the leader of the Gang "Melders", Matherson promptly Grouped up and ambushed the ring leader, regrouping surviving members under himself founding the GreyZone Gang quickly establishing his power in the region. 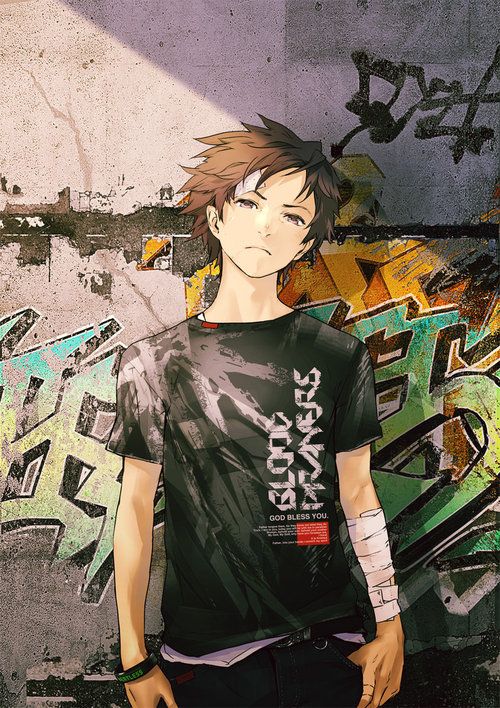 Outfit/Gear: Wearing Worn Jeans, Boots, Designer T-shirt under a Red Hoodie. On the Streets Tyler keeps a MAC-10 tucked into his Pack, or strung behind his back under his hoodie. a Large knife in his belt under his jeans.
Skills/Abilities, or Job: Second in Command in the Dragons. He works at a local game shop for spare cash. From a young Age Tyler noticed his skin had a second layer under the first, this one was much thicker, and resistant to heat. However he is joints are sensitive to cold, pained and sluggish when the winter months hit.
Alliance: Dragons
Personality: Quiet, caring. Tyler seems shy and distant but would give the shirt off his back for a stranger in need.
Backstory: His parents lived in the suburbs before their house burnt down in a street fight between the Geyzone and local authorities. Being the only one to survive, he was adopted by a few neighbors, and cared for till he was old enough to support himself and started working and paying rent at 18. At 16 he met the Dragons, and dedicated his life to their cause. To create a better life when the Government failed to do so.
Top

Name: Raven Hornigold Aka silent Blade or blade for short. Outfit/Gear: whilst normally dressed in her normal assassin attire whilst on the job. Raven constantly switches what she wears depending on what is needed. equipped with her hidden blades at all times, Raven can use a variety of close combat and ranged weapons. for long range she sticks with a high powered sniper rifle, for mid to short range she will stick to blades pistols and on the odd occasions assault rifles.

Skills/Abilities, or Job: Assassin/Mercenary -Raven is a master of stealth and deception, when she cant get close to her targets her stealth and skills in close combat come in handy. all else fail Raven will use ambush tactics and take her target from afar. being a sharpshooter comes in handy in her line of work.

Personality: Raven changes her personality traits ever so often to keep her unpredictable. its a strategy that works the best. being able to think on her feet Raven can go from a nice, caring, and loving person, to a merciless, cold killer with no remorse in a split second. its is true that she changes frequently but one thing is for certain she wants to settle down one day. that day being far off all she knows now is that work needs to be done and bodies need to pile.

Backstory: Almost nothing is known about Silent Blade's background. one day she showed up at the grey's HQ offered her services proved her skill and disappeared without a trace. leaving only a phone to contact her with. the same thing happened with the dragon's. when she first showed up not many believed she could do so much since she was 5'2 and probably weight less than 130 lbs. mind you at first glance they would be right until a blade found their throat.
"The Allfather's favor is a fickle thing. Impress Him with your audacity, and He will see you through to victory. But let audacity grow into overconfidence, and He will deliver you into your enemies." - Stigandr
Top

I like it! Glad to have you on board!
It's cool she has a wide assortment of gear and weapons, just realize when she is on the job, she probably won't be able to carry all of her Rifles/Sniper rifle/blades all at once.
Last edited by DJ Muffins on Thu Jun 14, 2018 3:46 pm, edited 1 time in total.
Top

Yeah she will choose a gear set depending on the job normally she would stick to blades whilst scouting first then go from there
"The Allfather's favor is a fickle thing. Impress Him with your audacity, and He will see you through to victory. But let audacity grow into overconfidence, and He will deliver you into your enemies." - Stigandr
Top

Outfit/Gear:
Sean has a playful and fun style often wearing cute skirts and blouses, but occasionally she will wear more professional clothing. Her Go-To outfit is a frilly black skirt and a blue-grey turtleneck, with black flats. She often carries a CZ-75 handgun on her, tucked away into the waistband of her skirt, along with an ornate hunting knife is kept on a garter on her thigh.

Skills/Abilities, or Job:
Secretary of the Greyzone and Second-In-Command for the Greys. Also works in a small cafe as a waitress to get some extra cash. Has a 'silver tongue', amazing manipulator and negotiator. Whenever she appears, people sometimes feel a vast array of different emotions depending on how she feels.

Personality:
Very playful and easy to talk to, a bit of a social butterfly. Likes to flirt for fun, but rarely gives anyone the time of day as she doesn't have time for such trivial things. Stubborn, feisty attitude and very good at planning things out are all traits used to describe Sean. Appears very childish and fun until you have her gun pointed at your head for saying one wrong thing.

Backstory:
Sean's mother was a simple woman, who wasn't all too keen on watching after her only daughter. Therefore, Sean had a lot of free range to make all the best (or worst) decisions with little to no consequences in her eyes. That was until she accidentally stole something from a Grey gang member did she realize all things would come back to bite her. To make up for her accident, Sean took a job as a secretary in the Greyzone Club, but found herself deep in the Gang and almost at the top after a while.
┍━━━━━━━━━━━ ⋆⋅☆⋅⋆ ━━━━━━━━━━━┑
Just another contestant in the space race.
┕━━━━━━━━━━━ ⋆⋅☆⋅⋆ ━━━━━━━━━━━┙
Top

Job
Commander in Arms and Assassin for the Dragons. Waitress during the day.

Personality
Cold as ice on the outside, but loyal to a fault. She will stand behind you until the end. Questions orders, but follows them. She has trust issues, but is warm and caring to those that earn her trust.

Backstory
Ran away at the age of 6, after her mom passed and got adopted by abusive aunt. She was found by her master, after she ran away from the police after stealing from a convenience store. Her master offered food and shelter if April was willing to give her life to the Assassins code: "Fight, Kill, Live". She was trained until the age of 18, at which she had surpass her master, and the top assassin in the family. After her graduation ceremony, she decided to follow her own path, by leaving the only family she had, she set off to work as a hire assassin at night, and a waitress during the day. Where she met and joined the Dragon Alliance, where she is now their Commander in Arms.
Top 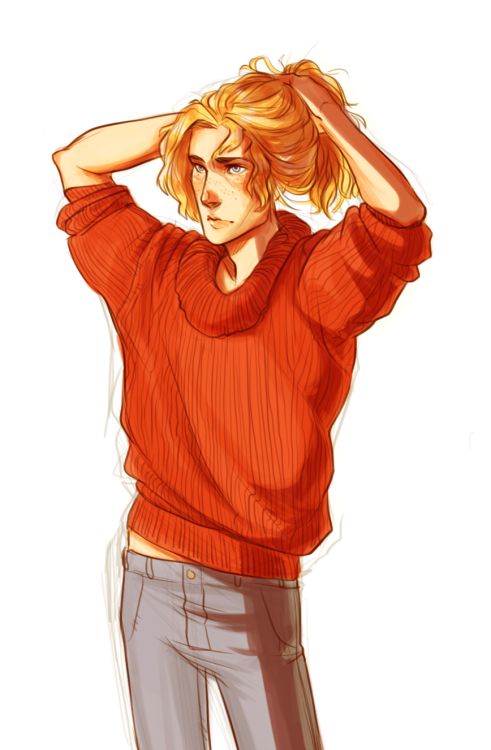 Outfit/Gear: Dressed in hoodies or t-shirts - most of them emblazoned with slogans that call out for a revolution - Julien is almost always seen in red. He's the quintessential scruffy teenager, with ripped jeans and Converse or combat boots. He's highly recognisable for the red scarf that he usually has wrapped around his neck, especially while on missions; it's often used to cover his lower face. He carries a switchblade and simple handgun, but rarely uses them if he can avoid it, and a lighter, which he'll happily use as often as possible. Julien's always down for a spot of arson. Usually, he also has at least one pack of cigarettes on him.

Skills/Abilities, or Job: Leader of the Dragons; politics student. Works in a bookstore for a part-time job. Julien can be charming when he wants to be, and has a way with words; he can deliver passionate speeches at the drop of a hat. He also seems to literally brighten rooms when he enters them, strengthening light sources - he carries around a lighter for this reason, as in dark rooms, he can lighten them drastically by strengthening the light it emits. Light seems to follow Julien around, and there are even times when he seems to glow just a little. It's easily write-offable as an optical illusion, though.
He's a decent shot with a gun, but not particularly above average, after training in shooting a handgun mostly just to be able to defend himself. He's tall but slight, and if he could ever be bothered to get into knife fights, he'd be deadly.

Personality: Julien is a rebel at heart. He's always resisted authority in the search of freedom, and believes fiercely in pursuing equality for all, more than prepared to make sacrifices for the greater good. He's strongheaded and can come across as incredibly unapproachable, and uncaring about those who surround him. However, that isn't really true at all, and he adores those he considers close to him, and will find ways to make them feel important and loved, even if he's not very good at demonstrating affection in the traditional ways.

Backstory: With a firmly working class background, a troublesome child from the start, Julien was raised with a strong awareness of the injustices of the world. Laurent, Julien's older brother by seven years, was pulled into the Greys' world when Julien was seven, and killed in a deal gone wrong a couple of years later. It was not Julien's first taste of wanting revenge, but it was the first time he'd be willing to go to such lengths to achieve it. He joined the Dragons young, at about twelve, working more or less only as an errand boy; his parents were absent much of the time, occupied by work, and Julien's activities were kept quiet from them. Through a mixture of being charming, pretty, and angry, Julien worked his way up the ranks, becoming leader at the age of 18 when the previous leader was killed. He cares greatly about taking the Greys out of power and restoring justice, fairness, and equality to the city and its government.
Alongside his criminal career, Julien believes firmly in the accessibility of education for all, and the pursuit of a non-violent world: he has continued his educational career, living a double life as a politics student at the local university. In the long term, it's very possible that, once the Dragons have taken over, he intends to install himself in charge of the city's government, leading its people to a brighter future.
Top

I was going to ask about his age, but you covered that nicely. A politician? Very fitting, and didn't even think About that. I like it! Working against Mathersons natural strengths as well. Nice
Top
Post Reply
51 posts