If you're willing to consistently post a paragraph and want more depth than casual, try this on for size. (5-10 sentences per post, on average.)
Forum rules
Locked
24 posts

I added elements. if you have any ideas, let me know. I may be missing some.

Name: Craumn Coznni
Age: 23
Personality: Craumn is slightly self centred appearance-wise; he believes he’s the handsomest Elemental of them all. Nevertheless he isn’t a mean person, more than willing to help his friends when the times get tough. He is very defensive of those he considers close, with his sharp tongue able to come back against any backhand comment. He considers Earth and Ice Elemental ladies to be very pretty, and will often act even more polite than normal in a desperate effort to impress them.
Element: Metal
Skills: Chraum can coat his body in a light coating of Chromium, turning it incredibly reflective and making him able to reduce the damage dealt to him from Light and Fire elementals. His arms can also act as sharp claws, which is not only helpful in combat, but can also act as digging and cutting tools.
Appearance: A pale, slim frame in 1.9m height and 78 kg in weight, Craumn’s facial features seem perfectly carved into his head. His hair resembles that of a Chromium nugget https://goo.gl/images/XzUD4B , and a small collection of gold flecks under his chin, forming a “goatee.” He dresses in long, flowing cloaks, preferring his tanned leather one above the others. His pants are considered to be “a size too large,” but he prefers it that way, due to the fact he doesn’t even need boots to walk comfortably.
Last edited by Hilo Takenaka on Wed Mar 07, 2018 9:24 pm, edited 1 time in total.

Name: Blaise Von Brandt
Age: 24
Personality: Blaise is normally cool-headed, but he has a short temper. The closer to anger he is, the more likely he's going to burn someone (physically AND/or verbally), with his hair matching his temper. Like fire, he can be unpredictable at times, but is extremely gluttonous. When not stuffing his face with food, he can normally be found trying to hang out with his girlfriend, a water (or plant) elemental. Other than that he believes in honor, and will often use his abilities for good, even though his intentions seem evil (think of forest fires)
Element: Fire
Skills: When he's completely enraged, Blaise will end up a literal walking inferno that will harm others he touches and is nearly immune to damage, unless it's water. Other than that, he can use fire as a means of propulsion for flight or charging ahead. He also uses fire like a fire mage, minus the spells, and as a means to enhance his armor and weaponry ("enchants" the armor/weapons with fire). He can also use the fire as a household tool (cooking, drying things, etc.)
Appearance:

When he's calm, his hair is a charcoal grey, with a streak of red like a smoldering fire, but when he's consumed by rage,it turns into a burning red, like a raging wildfire. (his head also catches fire).
Last edited by Tr0llz0r on Tue Mar 20, 2018 1:56 pm, edited 2 times in total.
Stay tuned, folks~! Ha ha ha~
Top

Toff, the issue I see with yours is that he would normally have natural skin. he can make his skin all metallic, but it has to be a conscious decision.

Troll, the issue I see with yours is mainly the appearance. it's more like a dark Elemental than a fire Elemental.

Also, I guess I didn't explain it too well in the intro, but the word is almost in a post apocalyptic state. food is scarce, trees are dying, water is drying up, cities are in ruins. that is the main reason why I didn't have a bio field. everyone grew up in this environment.

Thank you for the feedback! Edited it to suit your wishes :)

looks good. just remember that clothes in this world are more of just what can be made with whatever is left. and it's hard to keep them clean.

It's been ages since I've joined a good RP made by you Kali, so consider me interested in joining
When you feel so lazy you want to sleep at all times and still do all things necessary in life
Top

Name: Stefan Axelson
Age: 31
Personality: Stefan is the kind of guy that believes in letting things move as intended. He likes to see things play out from afar, but is more than willing to fill a role himself. He can be easily influenced or stubborn to a fault depending on how charismatic a person is. As such, Stefan is very wishy-washy by himself but with a group of like-minded individuals, he can be quite a driving force to be reckoned with. This man likes to take things a little bit at a time. Due to his short stature, Stefan is easily intimidated and really benefits from having the support of those around him. Speaking of his short stature, Stefan hates when it's brought up as it's something he's been insecure about since his conception. He longs for nothing more than a decent soak in clear water, however the state of the world denies him this luxury.
Element: Water
Skills: Other than wielding water as a weapon when necessary, Stefan is an astute listener and reader, always paying attention to details if he thinks something is up. He can summon a torrent of water that swirls around his waist and legs to lift him to a more advantageous position. He's a great puzzle solver and may become distracted by puzzles along the way. Stefan, when he's frightened, has a habit of putting himself in a large bubble of water as a form of protecting himself.
Appearance: 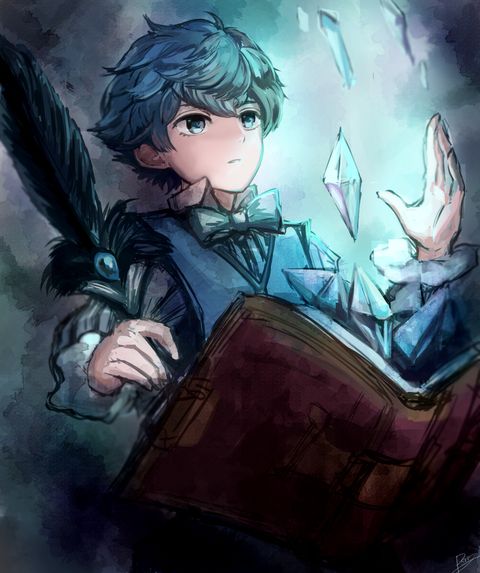 Extra: Stefan stands at 4'1" and wears cracked reading glasses whenever he has the time to sit down and enjoy a book.
You will learn about our loving and forgiving God or you will DIE!
Top

hey Roth, I don't think this is going to happen in Inter, since I don't have enough people. the one in Casual has people and I'll probably be running that one instead.

Understood Kali-dearest, I'll do a transfer then.
You will learn about our loving and forgiving God or you will DIE!
Top
Locked
24 posts