Thought I should make one with 100% honesty.

IMPORTANT: IT IS 1:32A.M. AND THERE ARE GRAMMAR MISTAKES. Sorry for this inconvenience.

Name: Austin
Age: 20
Gender: Male.
Mental gender: What Is this nonsense?
Mental age: Idk? 35 probably
S.O: The straight version of Demisexual
Religion: Christian (Fundamental Baptist)
Height: 5'11"-6'0"
Weight: About 195 lbs
Status: Single. Never had a girlfriend or even kissed a girl, but I have danced with one at prom once.

History: Born and raised in a small delta city on the banks of the Mississippi. Don’t remember much from my younger years, but I do remember suffering from mental and emotional abuse from my mother for my entire life. This is the reason I would become shy because I never learned how to fully communicate with people. I was held back in first grade because I only said three words the entire year. I got into my first fight with the regular playground bullies when I was 11. Joined a great community when I was 12, the place was called discussions and would basically transform into RPF over the next 8 years. Learned a lot from the members Dol, Bucket, Pav, Mish, B, Butcher Pete, and so on. Never told them, but they were an essential part of me becoming me. I started going to a small Christian school in ’14 where I would be apart of one of the greatest sports classes that Mississippi had ever seen. I currently am going to college and just got accepted in the radiology program.

Dislikes: People who eat loudly. Being hot. Strawberries. Alcohol. All drugs. Cats. Myself

Theme song: Under the Bridge by Red Hot Chili Peppers or Hero by Skillet.

Appearance: Green Eyes with medium length dirty blonde hair. Very broad shoulders that are scared beyond belief from a really bad sun burn. Look a lot like younger Elvis Presley, believe me or not. Usually wearing a red or black redhead shirt with black Levi.

Oh, I'm not like The Flash at all. Some would say I'm the Reverse
For the kingdom of God awaits me, for I am saved by the blood of christ
Top

Austin, you had a girlfriend when I first got here.. -.-
The Beans
♠

Name: Shinigami (Only my close friends here shall know my actual name).

S.O: Bisexual, though I prefer the ladies.

Personality:
Kind, respectful (at least, I try to be), highly introverted, socially awkward. I have an unusual sense of humor and can come off as rude or asshole-ish if you don't know me well, but I really do mean well. I enjoy making corny jokes with my friends and teasing/tormenting them.

I tend to talk fast and end up stuttering my words, and I loathe talking about my feelings. I find it much easier to talk through writing, and can type entire paragraphs composed of dialogue. I don't do well in crowds, and would much rather stick to a small group of friends as opposed to having a bunch of people around me.

Race: Human (though I'll deny it to the grave).

Dislikes: Humans, my face being touched, being hot, people who repeat themselves over and over.

Appearance:
Short brown hair and seaweed green eyes, a bit of stubble, and a set of joker bites. Throw in a neutral expression and you have my face.

I'm kinda chubby, though I am far from being obese. My skin is slightly darker than olive, and is actually pretty smooth. As for apparel, I prefer to wear jeans or cargo pants (especially black or camouflage) with a black or gray T-shirt. I like boots or high-top sneakers. On sunny days, I'll usually wear a pair of dark or reflective sunglasses.

Imma likely edit this at some point.

Personality: Heartless bitch, but have a soft-spot for animals and kids.. Anxious, over thinker, day-dreamer, depressed..

History: No.. Maybe I'll edit it in if I get bored

Dislikes: Being too hot.. Being depressed..

Gender: I'm of the female specimen, the best of humankind xD

Mental gender: Still a female, but one that's accepted into Hogwarts

Mental age: I'm either like a 10 year old boy, or like an 82 year old lady. It really depends on my mood.

S.O: Queer. I've given up on labels, because I feel like I don't fit into pansexuality? But not bi either.

Religion: Mocking Austin on his views

Personality: I'm the nerdiest of the nerds. I love Harry Potter, Dungeons and Dragons (specifically second edition), anime, and The Heathers (movie and musical). I'm like the mainstream trash of teenagers, and I'm proud. I'm pescsitarian, which means I don't eat meat, but i do eat fish. I'm known for using a shit ton of commas, like just look at one of my RP posts. I'm literally using a comma in every sentence. I volunteer at a local cat shelter, and donated my hair. That's why it's so short (the more you know)!

Race: A figment of your imagination

Nationality: I'm a Lebanese American, but I look very white

Interests: Screaming lyrics to songs, drawing even though I suck, writing poetry, and playing instruments (Guitar, flute, oboe, and piano)

Dislikes: The ignorance of some people, and the audacity that they have to hate on others.

Likes: Food, music, singing, and composing.
Skills: I'm actually proud of my musical ability, that's one of the things I'm confident in.

Theme song: Redundant by Green Day. I'm your stereotypical music emo, but I hate MCR. Don't come at me xD

Appearance:
Just look at the abundance of pictures I put on this damn website. I pretty much look like a small boy with boobs. Short ass hair, weird glasses, etc. But I love my dorky self, so yeah. I like to think that I look like MilesChronicles, but I don't think I'm amazing enough for that title xD

HI GUYS: REMINDER THAT THIS WAS A YEAR AGO SKDHDHSHD

Name: Hilo Takenaka... Or Henry. That works too
Age: 6teen is a Canadian American animated sitcom produced by Nelvana, and co-produced by Fresh TV for its last two seasons, which premiered on November 7, 2004 on Teletoon. In the United States, the series first aired on Cartoon Network on December 18, 2005, but was removed from the schedule on May 13, 2006. The show has since been seen on Boomerang in 2008.
With the first 78 episodes and both 45-minute-long specials produced by Nelvana, 6teen ended with a total of four seasons of 95 22-minute-long episodes (including two one-hour specials). The series finale aired on February 11, 2010 and included an acoustic version of the theme song by Brian Melo. DVD and iTunes releases have been made in both Canada and the USA, and some of the episodes are available on the streaming service Tubi TV. 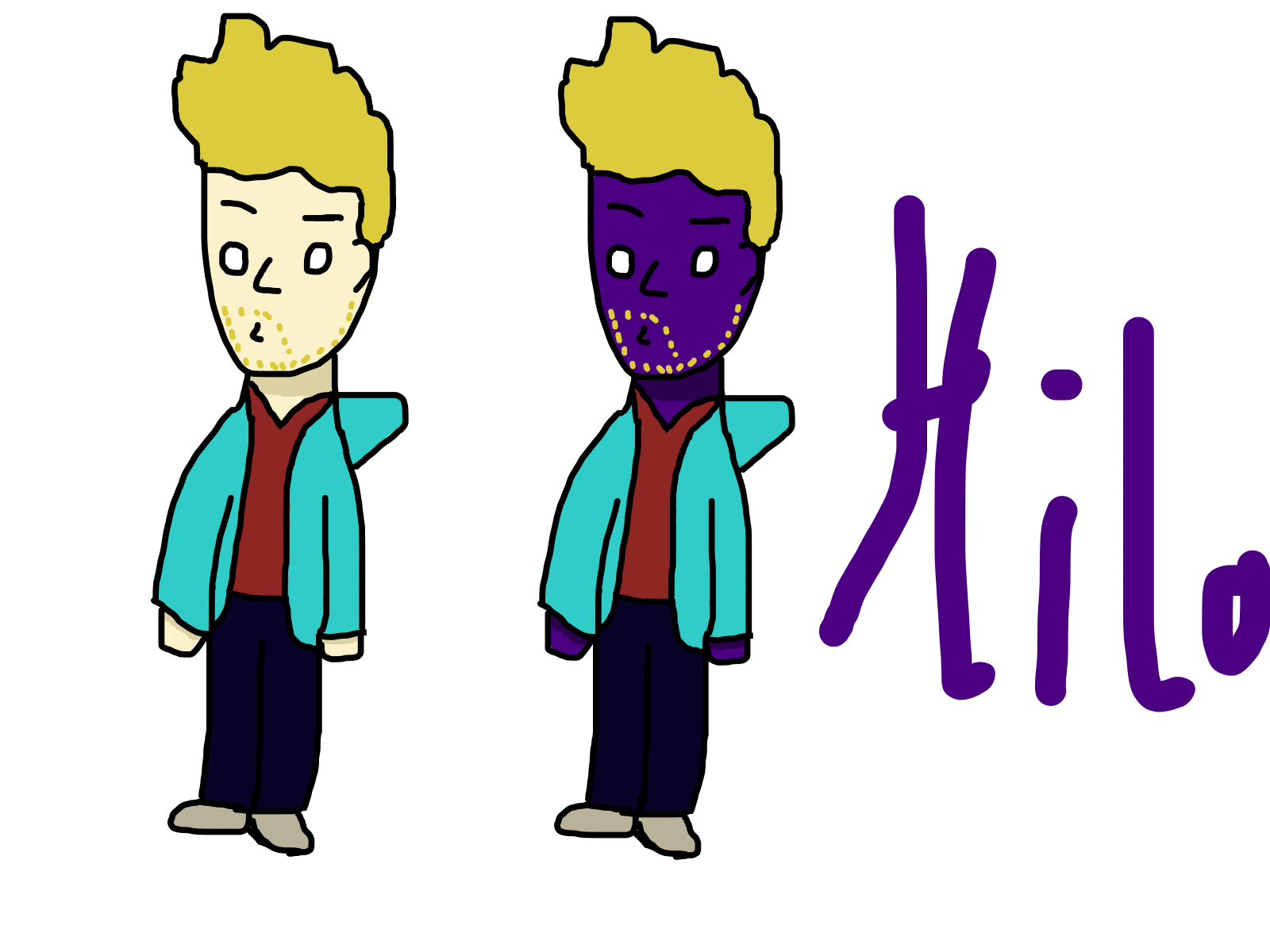 You have a dorsal fin?

I tried to draw a fin. I failed.