So I'm thinking, we can do a time skip right before the feast happens? Unless there's anything else you'd like to explore?

There are a few places that may be of interest but, whoever gets to all the fun spots on their first visit to a city?

Time skip to just before the feast is fine. I'll do the skip so we can start jumping right in. After all, Lirsha needs to get Nikita her dress, and the other soldiers need their suits.

Can't spoil all of the good stuff in one go, gotta savor the little stuff. Vacation101

Sorry for the long wait life jumped at me at a surprising pace in the past few weeks.

(My dad went to the ER and was just released this Monday so I've been a bit more active irl.) But, now that things are calming I should be able to get a response up. And skip us to the feast, or just before.

I'm really sorry to hear that, take all the time in the world,really. I hope he's doing fine.

He is. Much better.

And sorry for the long post. As you might be able to tell I was looking forward to this a little bit.

I hope he's doing even much better now! Hope everything's going well for you as well!

I'll be diligently working on this post! I had to deal with some potential unemployment and college finances recently but today it should all be handled mostly.

Don't worry about it. If you need more time then take it. I know how life gets crazy when you least expect so do what you need.

Even if you need to take a month or so I don't care. Be safe, stay good, and don't worry about posting unless you have time and you want to. (I'm not great with words but in the end, all I mean is, make sure you're good yourself before worrying over something as trivial as a response to an RP.) 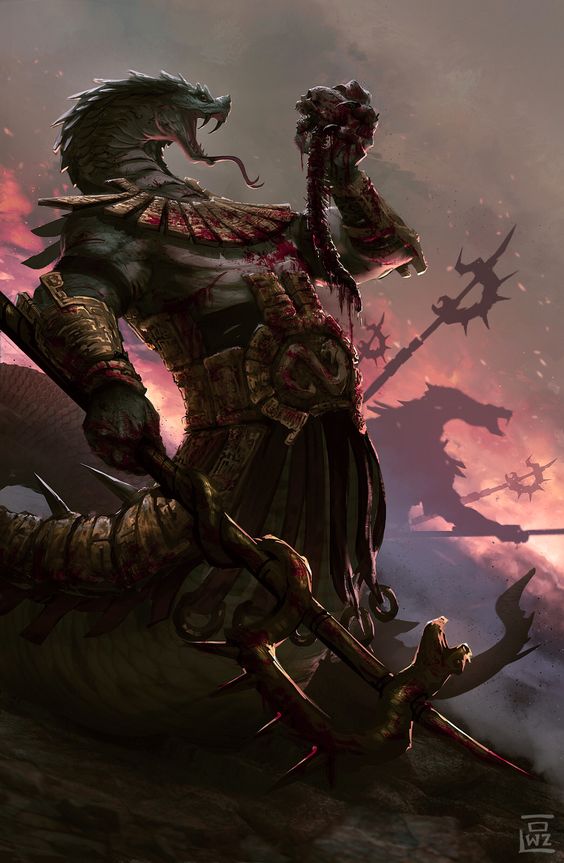 Serpentine of the Sabulo Canyons

The Desert is unforgiving and cruel. You will not find these savage reptiles within the walls of any Hestian civilization; or welcome in their borders for that matter. A race of bandits, thieves and slave traders. They are known for attacking travelers, merchants or even brigades of soldiers traversing through. They mostly favor to peddle with races such as Human and Elven(if they can get their hands on them), for their 'smaller' stature. Having no form of central government, they act in a variety of tribes. Constantly battling each other over territory control.

Tribes have very distinct physical features. These features are used both internally in their own societies as well as when interacting with one another. Those with hoods and fangs are held higher in their social structures. Greener colored scales are often seen among the tribe leaders and folk of influence. Browner scaled and other shades are seen among their common ranks and infantry.

Those taken by any of the factions are attempted to be sold off like commodities to bandit groups, pirates or any other ill folk around the world; even among each other. Those unable to be sold off, are added to a specific group. Used as a food source and slaves of their own personal use.