Hi!! This is our OOC! If you have any questions regarding the rp please let me know! 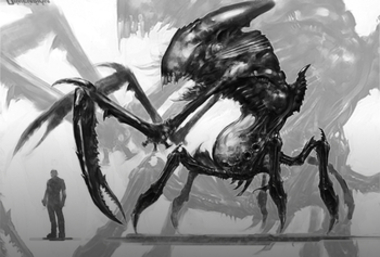 The Arachni-Lobster is a large predator, which kills its victims by cutting them in half in its claws or biting their heads off. The Arachni-Lobster is roughly two stories tall, with fleshy, not entirely insectile skin. The base of its slouched torso stands on six arthropod-like legs, while the topside sports a pair of much larger, pincer-tipped arms which it holds to its chest like an enormous mantis. Its head seems to consist of little more than an enormous, vertebrate-style maw lined with needle-like teeth, with the top of its cranium arching over the back. 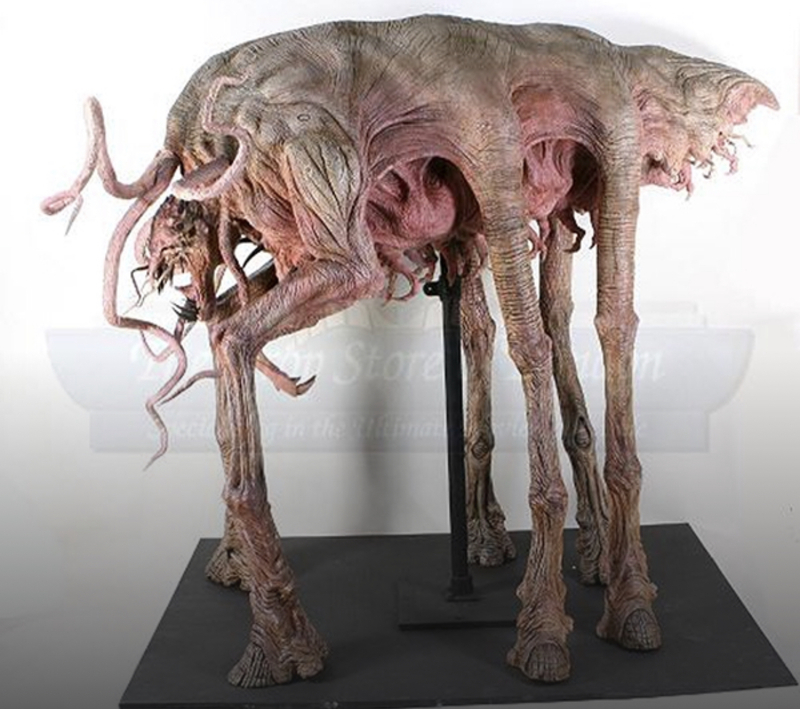 The Behemoth is a gigantic, six-legged creature. It has six double-jointed legs, feet about 18 feet tall, hundreds of multiple-jointed appendages on its underside, and tentacles above its head. The Behemoth's size is estimated at over 240 feet, larger than anything that has ever lived on the “normal” earth. Once out into normal Earth, The Behemoth will never actually harm anything. Its lack of hostility could be due to its size - it simply does not notice anything beneath it. 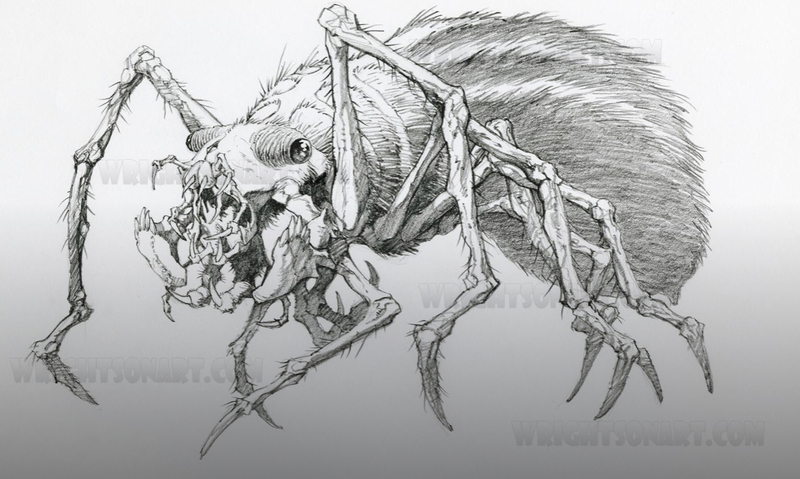 Gray Widowers are deadly, spider-like predators, each about the size of a dog, which have the ability to produce corrosive spiderwebs that can burn through materials like clothing and flesh. Gray Widowers also have a parasitic life cycle: they capture living hosts and lay thousands of eggs under each one's skin. After about a day, the eggs hatch into thousands of Gray Widowletts which eat their way out of the host's skin, killing it. 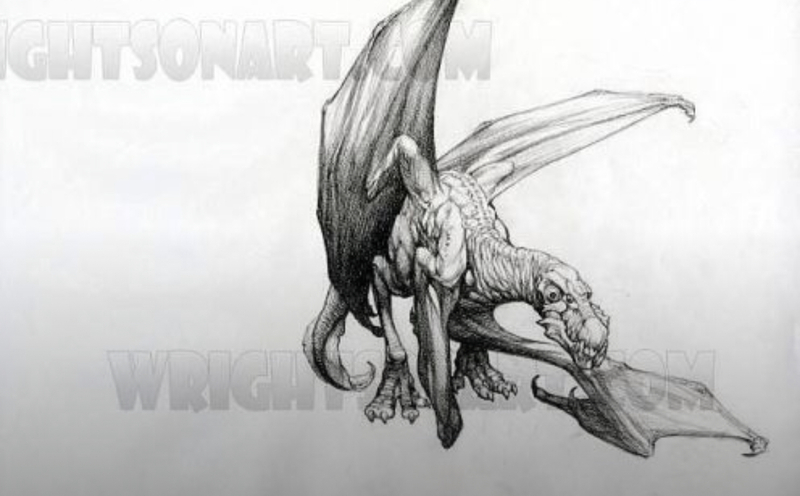 One of the nocturnal creatures of Rathe, Pterobuzzards are pterodactyl-like ablino creatures, with long, membranous wings and a heavy hooked beak. They are the predators of Scorpion-Flies. While Pterobuzzards will only attack humans if they get very close or there is no other food source, they appear to attack and devour Scorpion-Flies on sight. 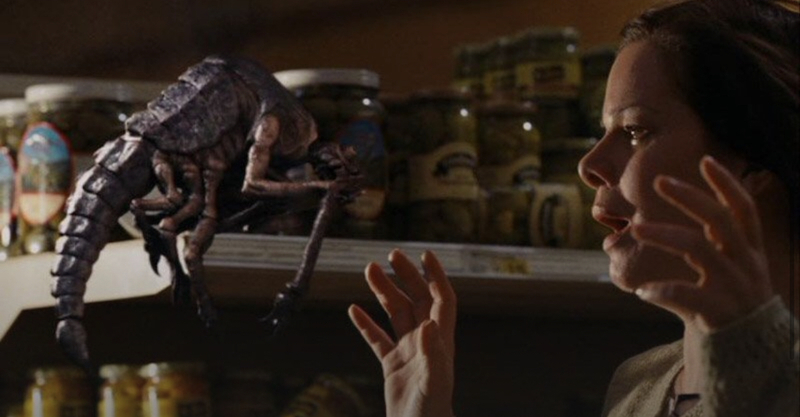 Scorpion-Flies are plump, flying creatures, about 2-4 feet long and the prey of the Pterobuzzards. Much like bees, they are not hostile unless provoked. Their stingers contain a neurotoxin which causes massive swelling and suffocation in minutes. They are also nocturnal creatures, attracted to light at night, and live in hives during the day. 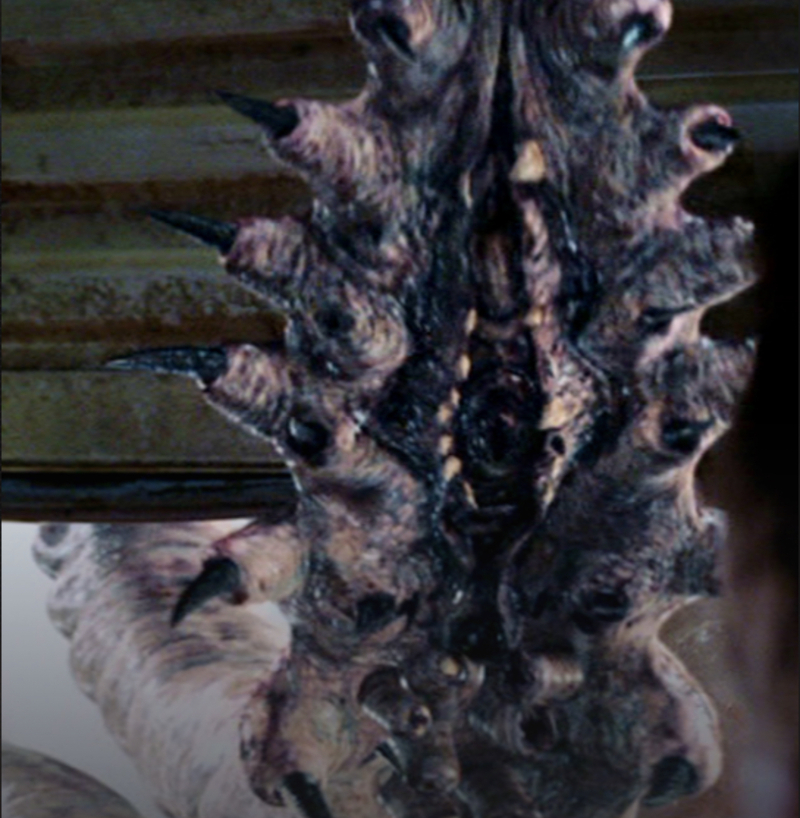 The Tentacles physically resemble those of a very large squid or octopus, but they have mouths in place of suckers which they use to consume prey as they envelop it. They have no real body, but are merely snake like, tentacles who slide around to move. They have fleshy-pink flesh on their undersides and slaty grey flesh on the rest of themselves. They also seem to be able to emit high, shrieking sounds from their “mouths” on the tentacles themselves. In order to kill one, or must be cut in half. Once tentacles finally dies it decomposes into a sizzling, black liquid in seconds. 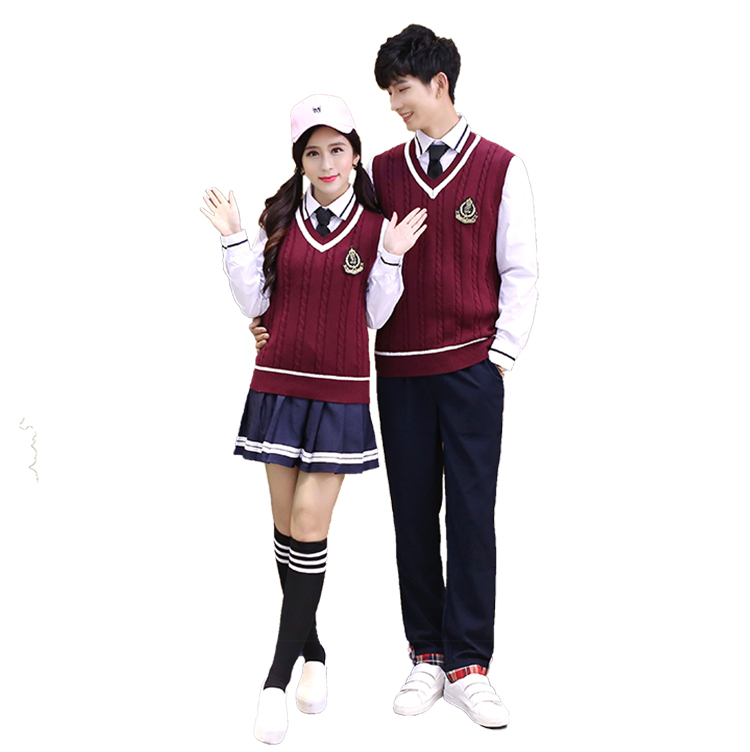 The students are required to wear their uniform Monday - Friday. With the weekends being their “off days”, they have the choice to wear whatever they want as long as it follows the dress code and isn’t too revealing. After classes they also have the option to change into more comfortable clothing. If it is a particularly hot day, students may remove the maroon sweater vest and remain in their white dress shirts to cool down. 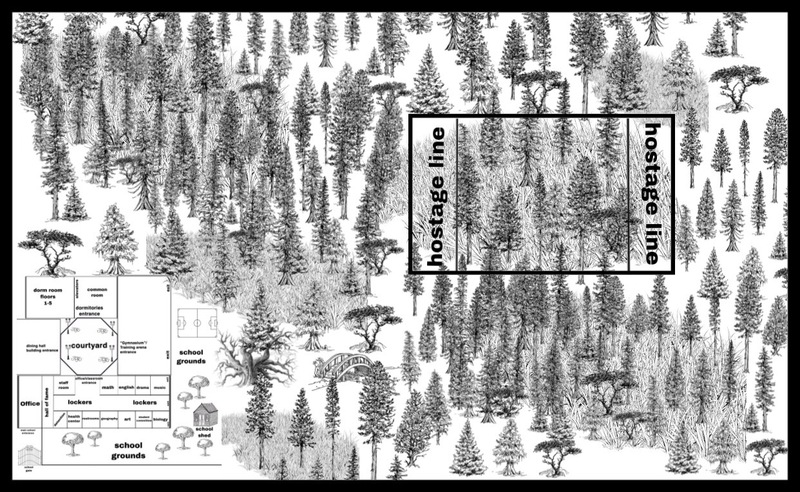 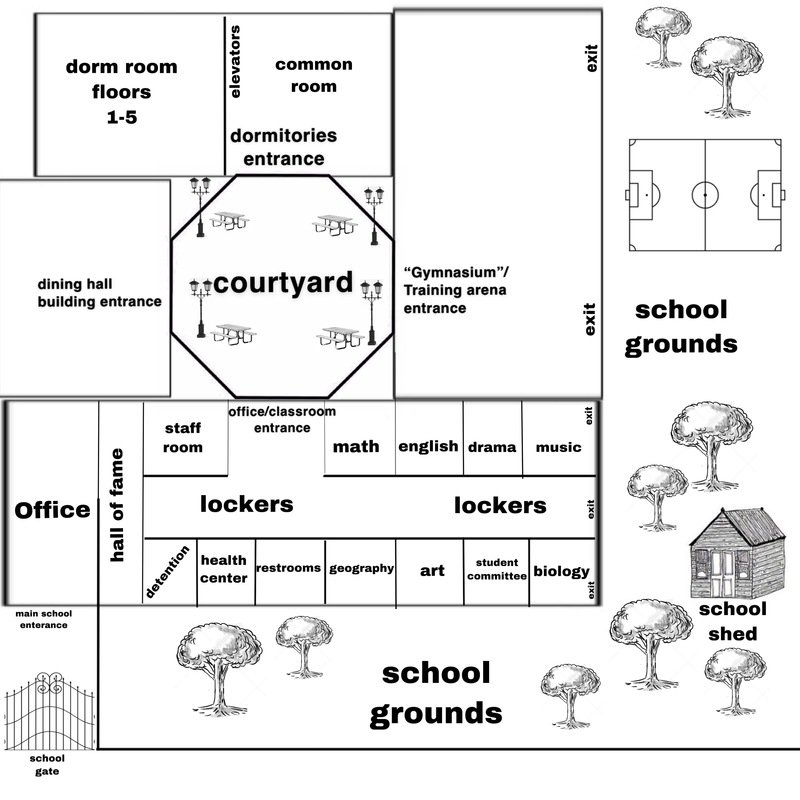 The school is on a very large hill made up of 20 acres of land. The rest of the surroundings are just trees and shrubbery. There is a brick wall around the school that does well in protecting the school, but it’s climbable. Although there is lamps in the courtyard, there are no lamps on the school fields. They are pitch black and generally off limits after sunset. 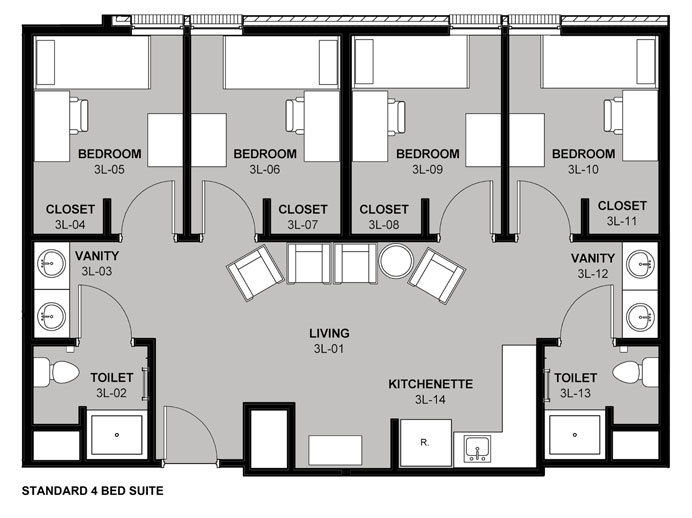 The dorm rooms consist of two rooms, and not four like depicted in the image. Everything else about the picture is correct in the lay out of furniture and such, but instead of the rooms being cut in half, it is just one large room with a large queen size bed, a desk, and a large closet.

Dorm room key:
1B 2B 3B 4B 5B 6B 7B 8B 9B 10B with B = bottom floor
11S - 20S - S = second floor
21T - 30T - T = third floor
31F - 40F - F = fourth floor
41H - 51H - H = highest floor
30% of the world’s population are currently people with abilities, the rest of the 70% are average humans. Although the numbers of the Gifted have been growing, it’s been happening very slowly. It is said that in 15,000 years, the population may have grown to 50%. That’s slow, too slow, seeing as Gifted individuals have existed since the dawn of time. There is no evidence that the Gifted gene is inheritable, it seemingly exists into random children, making attempts at focusing Gifted adults to give birth to more Gifted humans difficult. Nevertheless, the Gifted are accepted in society, as they have always been there and coexisted with normal humans.

Although the Gifted look human, there are a lot of differences. Gifted people tend to be taller and unusually good looking. They all are unnaturally strong, being able to life three times their body weight. Their senses are heightened as well, making them have quicker reflexes, better eyesight, hearing and smell. They also have a longer durability; being able to run for longer periods of time than the average human, withstand more damage, and have a stronger pain tolerance. Some Gifted also are strongest during specific times of day, be it daytime, twilight, or nighttime. Most Gifted are born with one ability, but in recent years some have been reporting two abilities. Currently in the whole world, there is a total of three individuals with two abilities. Primrose Baker, Oscar North, and another student located in Ireland.

I'm also editing the first post of the OOC to include some rp details.

Can I add one more fear to my character? I think it will make things interesting.
Top

Depends what it is!

Hey I’m so sorry! I’ve been sick with the flu and haven’t posted anywhere whatsoever. I’ll try to get a post up tomorrow.