If you're willing to consistently post a paragraph and want more depth than casual, try this on for size. (5-10 sentences per post, on average.)
Forum rules
Post Reply
52 posts

Magic, it is something everyone dreams of having however, what if I told you magic was already around? Half-Breed High is the place to be! This school was formed on the premise of maintaining the lives of livelyhood of the Half-Breeds of society. Sure not every Half-Breed is exactly the same... but, that is little compared to the greatness that you can become.

Name:
Age:
Breeds:
Sex: [Some races not applicable but most are.]
Powers:
Grade: (HS =High School CLG=College)
Weaknesses: [If applicable, Ex: Vampire half-breeds probably have a low sunlight tolerance, Werewolf half-breed not a fan of silver.]
Appearance:
Bio: [Min 2-3 sentence]
Other: [Anything extra you want to add in or so on so forth. Leave blank/remove it if you have nothing to say. Sexuality would go here for example.]
Dorm-Mate: [Leave TBD until you get a partner, I will decide partners VIA a name wheel I will create after all members are set in stone.]
Last edited by Cole Faux on Sat Jul 18, 2020 1:20 am, edited 5 times in total.
Sandbox Character: https://rp-forums.net/viewtopic.php?f=1 ... 69#p374869
Sandbox BBEG?: https://rp-forums.net/viewtopic.php?f=1 ... 59#p381959
Sandbox Exposition: https://rp-forums.net/viewtopic.php?f=107&t=15908
Top 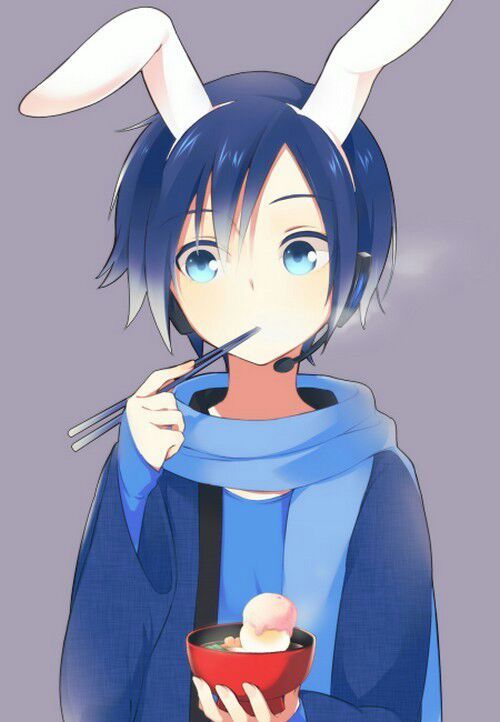 Bio: Aki Moburu hardly recalls a time where he wasn't mostly left to his own devices. His mother being a tree spirit was almost always in the forest tending to the trees. His father was a busy bunny, always working and never home. So he learned quickly what is means to be alone. Not that he minded, he inherited a lot of traits of a bunny, being constantly skiddish he rarely finds himself able to talk to others anyway. The only thing he has ever needed to chat to are the plants in his backyard. He has learned a lot from them about how mean humans and most half-breeds can be. So when his father came home one day and told him he would attend Half-Breed High... he was less than pleased. However, he didn't have much say in the matter and moved into the dorms against his own better judgement. For the most part he has kept to himself and avoided talking but, this year he heard he was to be given a room-mate. As he has gone through his school years games became a good outlet for him. Hopefully his room-mate won't get on his case...
Other: He is more interested in females than males but, doesn't honestly have a set-in-stone preference.
Dorm-Mate: Erinne White Fox Rivers
Last edited by Cole Faux on Tue Jun 30, 2020 10:24 am, edited 1 time in total.
Sandbox Character: https://rp-forums.net/viewtopic.php?f=1 ... 69#p374869
Sandbox BBEG?: https://rp-forums.net/viewtopic.php?f=1 ... 59#p381959
Sandbox Exposition: https://rp-forums.net/viewtopic.php?f=107&t=15908
Top

Is it time to get back to basically joining every group thing that pops in Intermediate? It is! All righty, school slice of life, we got this.

She sometimes can't help but try and pick fights. Proud to a fault it can be hard to admit to being wrong or standing down its a thing that's gotten her a bit of a record. This has thankfully been a bit counterbalanced by a strong desire to help out others. Usually quick to think of classmates and friends like her family. She might never be a leader of anything most teachers have felt sense she came to Half Breed High four years ago, she will though claw out the eyes of anyone who tries to start something with those she cares about.
Other: "Bisexual if you gota know. Fond of Rock, martial arts, and a supporter of glorious manes!
Dorm-Mate: TBD
No Longer In Use: The Once And Maybe Future Characters
Intermediate: Noira Termitaria Masked Tazer
Advanced: D.E.D Ash Spacebox Lioness
Sandbox: Lotus Lotus Cult Quiver Poison Mango Martyr Baba Yaga Blinded Visionary
Pax: Crimson Lotus
Top

Both approved adding you in now, the human should make things interesting.