RP here if you don't want to worry about guidelines or length. (4 sentences or less per post, on average.)
Forum rules
Post Reply
43 posts

"It had long since come to my attention that people of accomplishment rarely sat back and let things happen to them. They went out and happened to things." -Leonardo Da Vinci
Top

Full Name: Lujet Lalou
Age: 17
Gender: male
S.O.: bisexual
Species: dragon hybrid
Rank: C
Personality: Lujet is spunky, curious, compassionate, and friendly.
Short Bio: Lujet is just about to graduate Castell College and couldn't be more excited. His degree will be in magical arts of summoning creatures with a minor in water magic. He has an uncontrollable second form that he pops into when his emotions are high; a tiny dragon the size of a small cat. It's not a very useful form and he has yet to control when he turns.
Appearance:
•Height: 5'2"
•Weight: 140lbs
•Photo:https://pin.it/edKkeDq
Top

Personality: He can seem cold and distant on the surface, but is deep down a very kind and compassionate person. He cares for those around him, but he doesn't let his true feelings show to anyone. He is also protective and will jump into dangerous situations to help someone regardless of if he knows them or not. On the other hand it is also true that he doesn't really know how to act around others. This is because he tends to avoid making any connections with those around him. He does this out of fear of multiple things. First, that if he were to lose control of his powers he might seriously hurt or even kill someone if they were around him. So he feels by not making friends then the others will be more likely to stay away which would lower the likelihood of someone being near him if he did lose his hold on his powers. He also knows that not only will he likely die young but he will probably die soon, because of his current age. Which he feels is another good reason for him not to make friends with others, because of the fear of causing others pain when he dies. That way, hopefully, they won't be hurt when his time comes. Another fear is that he could lose himself and turn into a Dark Knight. Because of this he hopes that by not getting close to the others then it will be easier for them to kill him if he ever turns. However he also worries that his strength could be too great if he was to turn evil. So he carries with him a very potent and fast acting poison that he personally designed. That way if he feels like he might be loosing himself then he could take the poison and hopefully end his life before he became a problem that they would have to deal with. Lastly he worries that the others might see him as a monster. This is because he is the member who kills their enemies if they are especially dangerous. He feels it's safer to kill the worst of their enemies in order to make sure that they can't become a problem again in the future. However he feels this is likely looked down upon by the others and so would rather not get close to them. That way they won't have to feel disgusted by him being near them. Except of course when they have to be because of their missions. Even then he is only around them as long as he has to be.

Short Bio: He was eight when he was found behind a convenient store. He had a large bump on his head with a gash in it that a fair amount of blood was coming from. He had amnesia, and nearby him was the dead body of a known kidnapper, and child molester. He had killed him with his powers, and even though the boy didn't know it, this was also when his powers had first manifested. It was discovered that he was an orphan, and had no family, so he was sent to Castlle College in order to be trained. So far he is the only person to have been sent at such a young age. But this was deemed necessary because of his situation.

They keep him separate from the others until he was fourteen, and it was decided that he was safe enough to let around other students. He has still had very little real meaningful interaction because of the fact that he feels it's safer not to get close with others. None of his memories from his early childhood ever returned. He does however remember killing the man who kidnapped him. Because of this he has nightmares about being kidnapped, what happened to him, and how he killed his kidnapper every time he sleeps. Even to this day.

Since he has never gotten close to any of the others the only person who knows what happened to him is the principal of the school, Johan Nathaniel Knight. However, even though that is the case, Dante still isn't sure if he can trust the principal. Some of the things about the man just don't add up to Dante. Then combine that with the fact that the principal could very well be the person who kills him and it just doesn't really leave much room for trust in the young man's mind. He does hope for the best, but he is also prepared for the worse.

•Scars:
Human: The tattoo like markings from his hybrid form show up on his human form as scars. Other than these he has none.
Hybrid: None

•Piercings:
Human: None
Hybrid: None

In this form he has access to almost none of his powers. The only exception being his ability to travel through shadows. However this ability is greatly weakened and can only be used on himself in this form. He also is usually tired and hungry when in this form because of the fact that he uses a lot of his power to maintain the form. This is because his body seems to resist being in this form as if it wishes to return to his natural form instead. However this is the only power he has access to he does still have the same physically enhanced capabilities that he has in his true form. Which include enhanced strength, durability, dexterity, and speed. 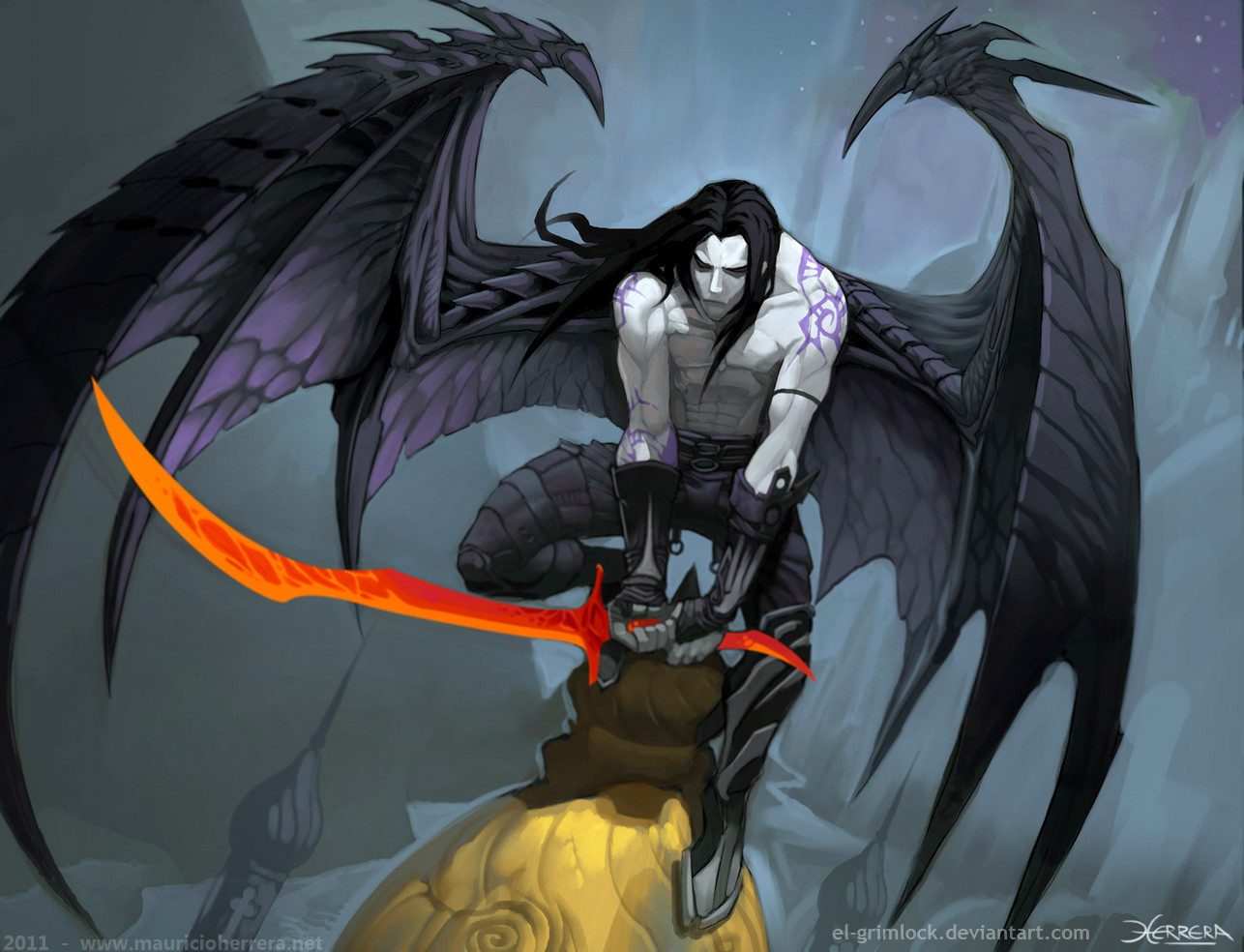 This form allows for to use all of his physical abilities and powers. It also allows him to travel through shadows with others. His power to move through shadows is the ability he has the most control over. However the more people he takes with him when traveling through shadows the more difficult it is and the higher chance that he might accidentally leave someone behind. This is dangerous because the longer a person is inside of the realm of shadows that he travels through without him the more likely they are to lose their mind. He also has the ability to turn himself into a shadow. This power is the easiest to use so he has a good grasp on how to control it. However if he loses focus or stays a shadow to long he risks losing himself to that form if he isn't careful. His last and most difficult power is the ability to manipulate and control shadows themselves. He can create weapons and shields out of shadows which is the easiest way to manipulate them and allows him a fair amount of control. But he can also use the shadows themselves as weapons. This is dangerous though because of the possibility of him losing control of the shadows. If this happens the potential destructive capability could be compared to a out of control wildfire. So he will only use this power against the most powerful enemies, if there is nothing or nobody around to worry about harming, or if he is in a desperate situation and has no other choice.

(Sorry this took so long to get up. I've been dealing with some school stuff, and other things, with my kids so this took longer to get done then I initially thought it would.

Let me know if anything in my characters profile needs to be worked on. None of my current characters would work in this so I had to design a new one. So I hope you like him.

I agree it has definitely been a while. I'm glad to have the opportunity to rp with you again. If it's just us three I'm more than fine with that. But if we do Anne with others that's not an issue to me. But I'll leave that choice to you and Mon.

I also appreciate the fact that you would let ne play an SS level charter. It's also nice to hear that you think so highly of my past characters. So thank you for that as well.)

Are you still accepting people??
Top

Omg yasss
"It had long since come to my attention that people of accomplishment rarely sat back and let things happen to them. They went out and happened to things." -Leonardo Da Vinci
Top

@Orophin Accepted! We had the basic same idea with our characters having amnesia. Would you get mad with me if I still added amnesia to my character background..? If so I'll just come up with something else. Lol
"It had long since come to my attention that people of accomplishment rarely sat back and let things happen to them. They went out and happened to things." -Leonardo Da Vinci
Top

@Miro-chan I don't have an issue with them both having amnesia. Because even if they both have amnesia that doesn't mean that they are going to have a bunch of other similarities. So I don't see any reason to change that at all for your character.

Cool! Are the S and above taken?
Top

the SS are taken, not sure if there can be more than one S

@Orophin Ahh thank you so much! (TvT)

@Ash Nope! There is no limit to the S rank. Rank SS has been filled, though.
"It had long since come to my attention that people of accomplishment rarely sat back and let things happen to them. They went out and happened to things." -Leonardo Da Vinci
Top
Post Reply
43 posts