RP here if you don't want to worry about guidelines or length. (4 sentences or less per post, on average.)
Forum rules
Post Reply
86 posts 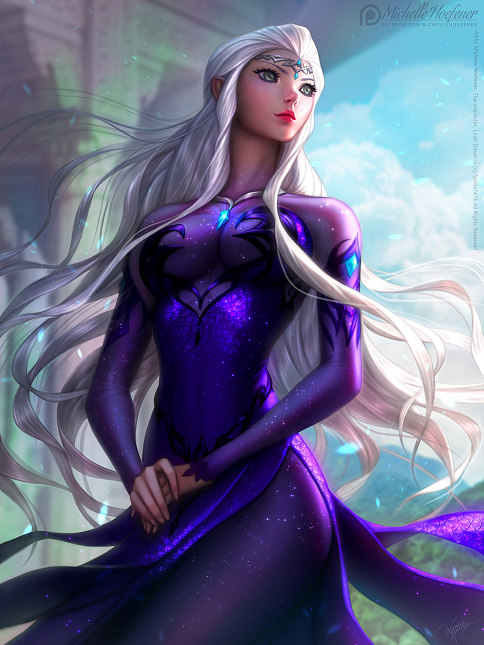 AGE:
Twenty Five in Serenian years (a few thousand to other species)

PERSONALITY:
Mysterica was a girl who lived in a perfect world. There was nothing to worry about, and no outsiders ever bothered them. She Worked and studied hard to take control of Serenia one day.

Pale skin that almost glitters slightly in the light.

Silver blood that has healing properties.

BIOGRAPHY:
Serenia. A perfect paradise. The land was covered with pale green grass, with a rich purple sky. Trees made of opal littered the landscape and gathered in large, glittering forests. The flora and fauna are unlike anything seen elsewhere. Crystalline plants and animals, as well creatures found in varying mythologies. These creatures lived peacefully alongside the Serenians, the inhabitants of the world. It was a perfect, peaceful world with no pain, suffering, war, or greed.

This is how it was until they were discovered by the ancient sith. They took note of their subtle use of the force for healing, and the fact that not a single elderly person was seen. They believed they were the key to immortality, so the world was taken over and the peaceful species were subject to horrific experiments. Those that survived became corrupted by the dark side, and turned into a twisted mockery of what they once were. Among these newly named Chaoticans, was the King and Queen.

Their daughter, Mysterica, was a part of a different set of experiments, in which her lifeforce was ripped from her body and bound to a crystal. Her body didn't die. Before they could conduct anymore experiments and research on the people, the Jedi arrived and the Sith left with the Chaoticans. One of the only untouched Serenians, Mariza, joined the Jedi, taking Mysterica's body and the crystal that held her lifeforce, unsure of what to do to help her.

Over the years, and clashes with the Dark Side, Mysterica's body was left hidden away, and her crystal was lost not long after. Mariza tried to locate either, but to no avail. The crystal had come into the possession of a young woman who was expecting a child. Mysterica's lifeforce passed onto the still developing baby and was reborn, though unknown to her new mother or even herself. She lived a full life and passed on, her lifeforce returning to the crystal that she kept with her, without knowing why she held onto the trinket.

The Cycle continued. Her lifeforce would remain dormant until picked up and passed on to an empty vessel, and live a full - or sometimes short - life, and repeat. This has continued to this day, with those who know of her still searching for her.

Healing:: Mysterica is capable of healing critical wounds. She can't regrow limbs or revive people. Her blood also carries these properties and is capable of healing those who come in contact with it. The Serenians called it healing magic, though it was a very focused use of the force that was a part of themselves as a species.

Rebirth:: Mysterica is bound to her crystal. Upon contact with an empty vessel, organic or inorganic (droids designed for a higher AI are the only ones suitable), her lifeforce is transferred to the vessel until the time of her death or something pulls it from her.

I'll have her current persona later on

Bio: He raised until 6 in an Imperial shipyard and born with a connection to the force, but his parents never understood what it was. He proved to have a gift with programming and engineering and was drafted into the imperial army for his skills after his parents were killed for refusing. At 12 he joined the imperial special forces where he designed gear and mech for the inferno squad. When the leader of the squad rebelled and escaped, Aeros was charged with aiding and abetting him and was left for dead. He was found by a Mandalorian and taken in by as foundling. After having been almost killed, he studied hard learning to defend himself this time, not just sticking to just building stuff. Through various missions and rigorous training, he discovered the connection to the force had deepened, and he began being able to do things that couldn't be explained. The idea is that he is strong in physical force augmentation and sensing his environment but has a hard time affecting things other than himself. He even has a hard time doing something like the force push. So like he can leap 30 feet in the air, no problem but can barely lift a pebble. When the Mandalorians began to notice this, they contacted an old friend Cero to train the boy. ( Yusi has agreed to this ) And thus started his training.

Extra: He loves anything unique, especially things from different cultures. He collects various weapons. His favorite is a Gungan shield and amban rifle. His constant companion is an ID10 seeker droid that he has highly modified, and that syncs and rests on the back of his personalized armor.
Last edited by Unpredictablefrenzy on Sat Feb 29, 2020 8:12 pm, edited 1 time in total.
Top

I have an idea... If you'll accept it.
"Step one, crawl inside. Step two, the screws go tight all around. Cross your heart and hope to die, stick a needle in your eye."

To clarify; I did agree for Cero to be training Unpredictablefrenzy's character, however Cero refuses to call him Padiwan or to be called master. Cero does not see it as training, more like a favor. As Cero would put it; "we are couleagues sharing trade secrets. Nothing more, nothing less. You call me master in public again and I will abandon you. Possibly make you forget my existance too if I feel like it." (totally bluffing on that last part)
May the stars align to guide you
Top

Sorry, for my absence I have had a really busy time at college and if I can get through this weekend I shouldn't be as busy. Hopefully, we can start on Sunday
Top

I might be a minute, currently working on my PMC RP.
"Step one, crawl inside. Step two, the screws go tight all around. Cross your heart and hope to die, stick a needle in your eye."

I want to apologize to all of you for kinda disappearing. College got busy and I had to handle that stuff. So thank you for being patient and hopefully you are still interested.
Top

are unpredictablefrenzy's and monika's character's accepted?
May the stars align to guide you
Top
Post Reply
86 posts

Users browsing this forum: No registered users and 10 guests