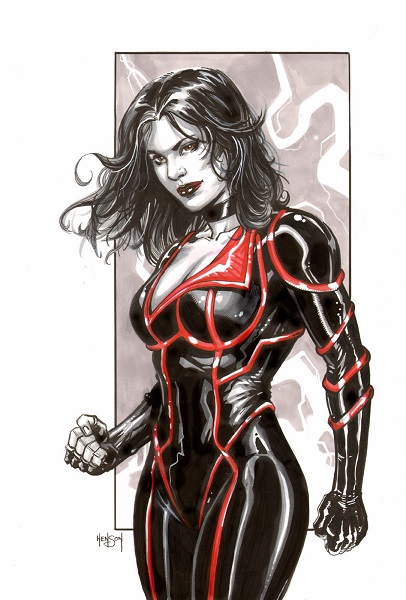 A Manufactured Deity
ASTRA
.
We knew the end was coming, and so we made her. With all our technology, we created the vessel for our prayers, the core of our beliefs. This everlasting tenet we cast into the star that would doom us all, that she may be born from our destruction. Our prodigal daughter, she will seek and she will find, and she will bring back the worthy. Through her, our civilization will rise once more.

Despite appearances, the entity known as Astra is not human, nor has she ever been. She was created by an alien civilization that, for all its technological advances, had not yet managed to make it beyond the boundaries of their own solar system when the system's star went supernova. The civilization had some time to prepare before the end - not enough time to save their world, but enough to experiment. They created a core and imbued it not only with what technology they had available, but also with belief. In a theocratic society, there is a good deal of belief to imbue, and the civilization sent the core of what they had created into their near-bursting sun, setting off the apocalypse that would destroy them all, and creating the cradle for the rebirth of their civilization.

In a theological sense, the starborn might be considered a newborn deity. In the technological sense, perhaps she is only a construct. Whatever she might be, her goal is clear - she must bring about the rebirth of the civilization that created her. For that purpose, she seeks to shepherd people back home - perhaps they are the worthy who will be the founders of the reborn civilization, or perhaps there is something else going on.

Astra takes the form of a member of whatever civilization she is currently in. On Earth, that means she appears as human. On other worlds, her appearance would be different. Being born of a literal star, her body is incredibly durable - obviously, it has already been capable of surviving a supernova and the resultant casting into space. She does not require food, water, or air to survive - she is sustained entirely by her own creation. Additionally, her strength is immense, enough to crush even titanium within her grasp.

Her age is indeterminate. How long did it take her to cross countless galaxies? Astra's view of time is different from standard - she experiences time in relation to what is happening. When there is much occurring, time seems to slow - meaning that in extremely intense situations, she is actually capable of thinking, reacting, and moving much faster than her baseline. Conversely, when there is little going on, she tends to be semi-dormant, and long stretches of time may seem to her only an instant.

Motion, too, is not quite as standard for her as for others. Astra is capable of moving in at least three dimensions with ease, and standard movements like walking are more imitative than required: she simply wills her body in the direction she wants it to go, and lets the minds of other people fill in how that appears to have happened.

If she can be said to have "powers" beyond her durability and strength, Astra is the inheritor of the beliefs of an entire civilization. She is holy, with all the mystical prowess that provides. Her powers work upon the psyche: she does not precisely attack the mind of a man, but rather causes it to turn inward and envision. For the price of those visions, for some she offers a chance at salvation and a new world. For others, she offers only a final judgment.
.
.
NOVOCCULA
The Eye of The Heavens
.
Due to events during Astra's arrival on Earth, her left eye was destroyed, becoming a supernova and then collapsing onto itself. Now, it remains a black hole, pulling in anything that comes too close, tearing at her divine flesh as it slowly grows larger.
Top
Post Reply
1 post • Page 1 of 1